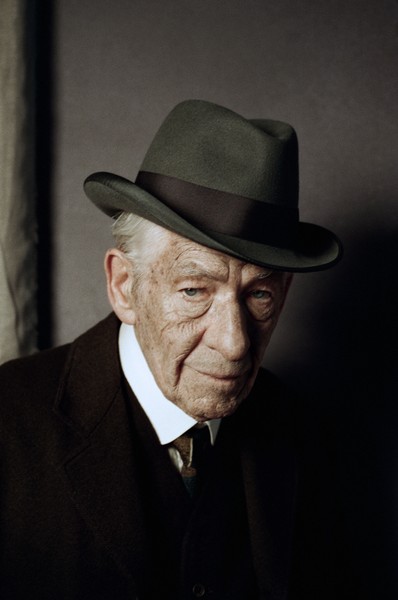 Like a fine wine some characters age with grace.  Master sleuth Sherlock Holmes gets quite the send-off in Mr. Holmes.  Put out by EOne Entertainment this dynamic portrait of an aging hero is now scoring points at the Fifth Avenue Cinemas and select Cineplex Odeon Cites.
Good fortune has always been a part of the most famous resident of Baker Street. Alas, Sir Arthur Conan Doyle’s memorable creation is now living out in the British countryside and tends to be a touch on the cranky side. Leave it to Sir Ian McKellan ( X-Men) to breathe new life into the ultimate problem solver,
With the  good Dr.  Watson no longer at his side Homes is cared for by resident aide worker Mrs. Munro and her restless son Roger. Both Laura Linney (Absolute Power) and Milo Parker seem to have a tough time dealing with the old gent as years of high living may have caught up with him. Still the spirit to solve puzzles rests with his soul and this beloved national treasure takes on one last challenge.
Slow moving at times, Mr.  Holmes is nevertheless a flawlessly acted drama that well preserves the spirit of this intellectual giant.  Director Bill Condon (Kinsey) presents a fitting tribute to this creative tactician and supplants the 104 minute story with great shots of the English countryside and nails the setting/atmosphere of the times.