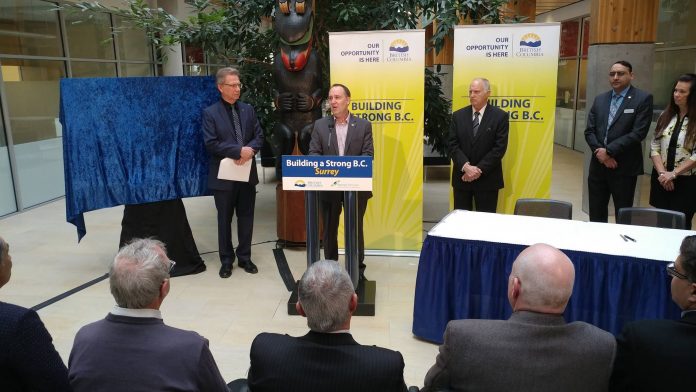 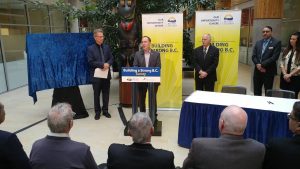 Surrey: The B.C. government is targeting the construction of up to 5,200 new student seats in Surrey, thanks to today’s commitment of $217 million for capital projects over the next three years to be planned and led by a new joint executive project board with the Surrey School District.

“Young families are moving to Surrey because it’s a great place to call home in British Columbia’s strong economy. We owe it to those families and their kids to make sure we are working together to build new school spaces for them as quickly as possible,” said Education Minister Mike Bernier. “I expect this new project team to dig in hard and develop plans to use the $217-million investment to get shovels in the ground for up to 5,200 new student spaces as soon as possible.”

Bernier announced the additional funding and new project board today at the Surrey Board of Education office, alongside Surrey School Board chairperson Shawn Wilson. They also signed a Memorandum of Understanding outlining the terms of reference for the Surrey Executive Project Board.

“Our board has been working very hard with the Ministry of Education to address the unique needs in the Surrey School District driven by our incredible growth,” said Surrey School District board chairperson Shawn Wilson. “Trustees want to break the pattern of perpetual pursuit of classroom spaces, and we’re proud to now have this significant capital funding and the dedicated, partnership project office that will help get us there.”

Job 1 for the project team will be to identify new schools or school expansions as quickly as possible so the proposals can be brought forward for provincial approval. That planning will involve defining the size of projects, as well as timing new school development to align with residential development.

“With this new project office, the City of Surrey is looking forward in continuing our partnership with the school board to deliver more schools for students in Surrey,” said Surrey mayor Linda Hepner. “Today’s provincial funding commitment will help address the critical need of new schools for our rapidly growing community.”

Staff from the Surrey School District, Partnerships BC, and the Ministry of Education will make up the executive project board. The project team will include a project director, financial manager, city liaison, project managers and project technicians. The board may also consult engineering, planning, environmental and architectural experts as needed.

All of the funding along with the new project team will help reduce the number of portables in Surrey.

The B.C. Government is making record investments in modern, safe infrastructure projects throughout the province – and in doing so, these construction projects are creating high paying, family supporting jobs. These investments are possible because of our strong fiscal plan – and through each, we are Building a Strong B.C. – together.