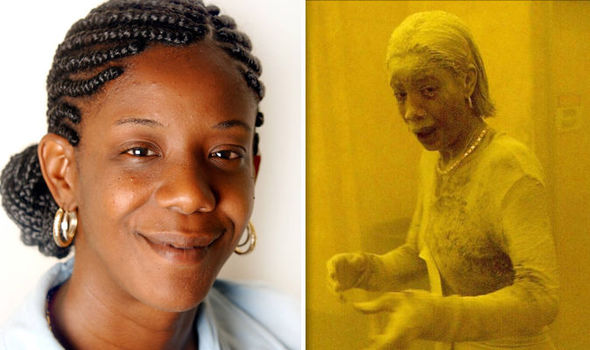 Washington, Aug 26 (IANS) Marcy Borders, a 9/11 attack survivor known as the “dust lady” whose photograph became one of the enduring images of the terrorist attacks, has died aged 42 after suffering from stomach cancer, media reported on Wednesday.

Borders became known as the “dust lady” after a photo showed her covered in dust as she escaped the World Trade Center during the attacks, BBC reported.

Borders, a mother of two, died on Monday, her family said on Facebook.

She blamed her cancer on inhaling dust during the attack and suffered from alcoholism and anxiety in later years.

“I can’t believe my sister is gone,” her brother Michael Borders wrote on Facebook.

Her cousin John Borders called her a “hero” and said she had “succumbed to the diseases that (had) ridden her body since 9/11”.

“In addition to losing so many friends, co-workers and colleagues on and after that tragic day … the pains from yesteryear have found a way to resurface,” he added.

On September 11, 2001, Borders was just one month into a new job at Bank of America on the 81st floor of the north tower when the plane hit.

“The building started quaking and swaying. I lost all control, and I went into a frenzy. I fought my way out of that place,” she told the Daily Mail in 2011.

Defying instructions from her boss to stay put, she fled down the stairway and into the lobby of an adjacent building where she was photographed.

In 2011, Barack Obama instituted a $2.78 billion fund to compensate first responders for health problems related to the attacks.

“Not only is she the ‘Dust Lady’ but she is my hero and she will forever live through me,” she said.