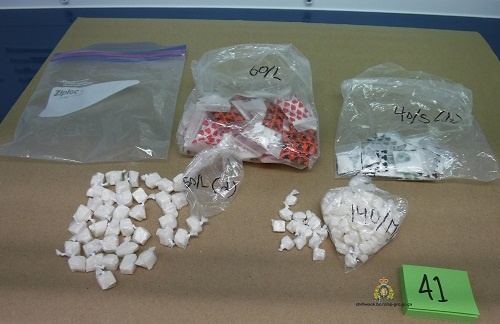 Chilliwack: Drugs, cash, and vehicles were seized after a RCMP investigation led to the execution of search warrants in Chilliwack and Abbotsford.

On May 2, Chilliwack Crime Reduction Unit (CRU) executed Controlled Drug and Substance Act (CDSA) search warrants of Abbotsford addresses in the 34000-block of King Road, and 3200-block of Gladwin Road followed by the execution of a third search warrant of a residence in the 46000-block of Yale Road, Chilliwack.

Over 300 grams of drugs police believe to be cocaine packaged in 700 individual amounts, three vehicles, $17,000 cash, and paraphernalia associated to drug trafficking were seized during the execution of the search warrants.  Five individuals arrested during the searches were later released from custody by police.

Following a thorough review of evidence gathered, all circumstances of the investigation will be forwarded in a report by the RCMP to the Public Prosecution Service of Canada (PPSC) for their assessment of CDSA charges.

“Criminal activity crosses jurisdictional boundaries as do police investigations,” says Corporal Mike Rail spokesperson for the UFVRD.  “Chilliwack RCMP remain dedicated in our commitment to keep illegal drugs off the streets of our community.”

RCMP remind everyone who witnesses anything they believe to be suspicious in nature to contact the Chilliwack RCMP at 604-792-4611 or, should you wish to remain anonymous, call Crime Stoppers at 1-800-222-8477 (TIPS).