Surrey: Neelam Sahota, the CEO of DiverseCity Community Services Society, was standing in the main hallway of the new, almost completed, campus when I showed up for our interview. She was an island of seeming calm as streams of tradesmen moved quickly but purposefully around her, carrying wood, tools and other supplies, putting the finishing touches on this impressive building. All one hundred and three staff will move to the new building on the northeast corner of 76th Ave and 134A Street, on Tuesday, February 24.Moving out of the way before we got run over, we stepped into the quiet of a colourful and inviting children’s room.
“This is actually our child-minding room,” explained Sahota, “so our clients can access our services while the children play safely here. The new building, which has been many years in the planning, will allow for greater efficiency over their former offices and (small) classrooms, and bring the whole team to 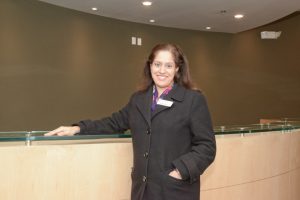 gether under one roof.
“We had lots of smaller units that were leased throughout Surrey but centered in Surrey Newton for almost 37 years,” said Sahota. “We were paying significant monies on a number of leases, so there was definitely an opportunity through our low interest environment and by consolidating some of our smaller leases and services, to bring them together. We could see they fit like a puzzle into one centre, so it was a go.” 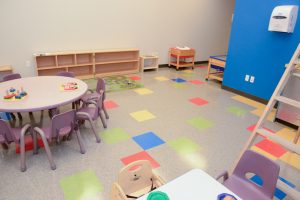 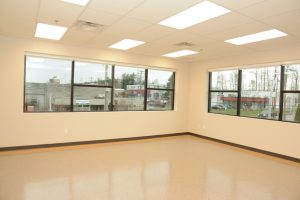 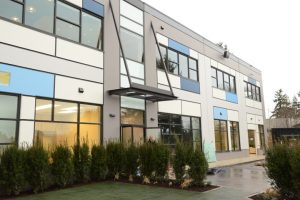 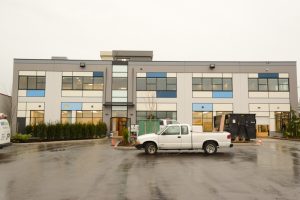 “We were trying to create a community hub, so we call it our community campus instead of headquarters or main office,” she said.
Neelam described the building as a two-story building with a rooftop garden and deck. It measures just over 19,000 sq ft, about the same amount of space they are leaving behind. The difference is that the old location was very inefficiently laid out.

“What we’ve done is to provide more space for programming,” she said, “and we’ve tried to efficiently reduce the amount of space for administration by locating our staffing components more wisely.”

Sahota said the new building would change their paradigm when it comes to offering trades and skills training. “We have a very large dividable space on the lower west side of the building that will allow us to offer trades training programs here. We’ve all been focusing a lot on trades lately, and we wanted to get into space where this could become a reality for us.”

“We’re in that scenario right now where there’s currently a large employment-training ‘request for proposals’ that has been out,” said Sahota, “and we’re at least able to say we’ve got the space to be able to do this. We have our immigrant trades training authority program that runs quite well already, but we didn’t have the space to do lab work and we couldn’t do any heavy trades. We’re hoping to strike up some partnerships with other organizations within Surrey to be able to offer a venue to carry out these training programs.”

The trades training space is about 2,800 square feet, and comes with its own loading bay. It has two separate entrances, so it offers the flexibility of partitioning if necessary. It comes with its own set of industrial type washrooms and a janitorial closet with the appropriate fixtures. It is appropriately wired and plumbed to meet the needs of any industrial applications they would want to have. It is even zoned to accommodate industrial use.

“In concert with the trades training space,” Sahota said, “there is a 1,000 square foot room near the reception area that is actually zoned retail, so we are hoping to run a social enterprise through this space. We’d like to have a little bit of linkage between a trades program, and hands-on training that occurs in the space next door. For example, if we put a training bakery into one part of the space, the adjoining area could have a small retail counter to sell the produce that the clients produce. The sky’s the limit. Some times, I even envision some sort of community hub, an internet café, where people have a place to mingle. It’s on the southwest corner of the main floor, so it gets a lot of sun. This and the trade training space have a lot of potential. We haven’t nailed down exactly what it’s going to turn into, but whatever it is, it will be great!”
The facility has a fully equipped community kitchen on the second floor, intended for use by many groups to learn nutritional cooking and spend some time socializing and getting themselves familiar with their other Canadian counterparts.

“There is a beautiful patio area on the roof which contains our urban planter gardens,” Sahota explained. “We’ll be showing people how to grow their own food to become a little more self-sustaining, two neat features that we couldn’t have at our other location.”

The rest of the main floor is made up of larger classrooms where all of our Language Instruction for New Canadians (LINK) programs delivery will occur. We have seven large classrooms where English language is taught. So that’s primarily the first floor. Throughout the structure, there are bright spacious classrooms with walls that will allow staff to resize rooms to suit their needs. On the second floor, north side, (with lots of windows and a great view of the north shore mountains) is a very large space, which is the staff lunch room and a classroom/presentation or reception space that can be divided by retractable walls.

“We have ergonomic furniture on castors,” said Sahota. “which can easily and quickly be moved away. The room will have a ceiling mounted projector which will make it the perfect venue for our 37th AGM, and our Official Grand Opening on September 22.

“I want people to pop in, come take a look,” she said in conclusion. “We are definitely open to opportunities to partner and or work with employers as well as not-for-profits. We want this to be part of the notion of a warm and inclusive community within Surrey. We want to assist with the revitalization of Newton; we want to foster that feeling of community and connectedness. We’re here to be part of that solution.

Joke with babies to make them smart