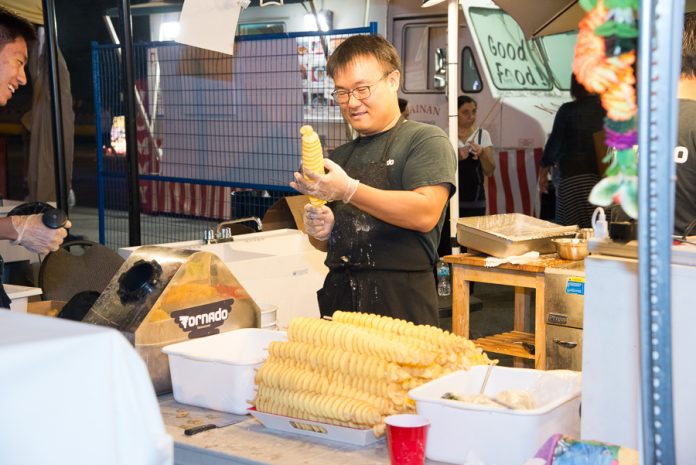 Surrey: It was in the warm twilight of a late August weekend that I returned for a third visit to the Surrey Night Market. It felt like going to a country fair, midway and all. There were excited kids running around, you could smell potato tornados, candyfloss, and Indian food! Wow it was utterly mouth-watering. I walked between the rows of vendors, whose stalls appeared magical in their special lighting contrasted against the dark sky. My guide on this evening was Satbir Cheema, who along with Jazz Narula, and Garry Grewal created the Night Market. We strolled the market and talked about the vendors and the plans they had for bringing in even more attractions, like a beer garden, more vendors and more entertainment.

One week later, the night market was in ruins following a serious wind storm that saw record winds up to 90 kph across Surrey. They swept in about 10:30 on a brilliant sunny morning on August 29, and within minutes the market was virtually destroyed as the tents covering vendor’s stalls, display cabinets, food vendors with cooking equipment, the entertainment section, and all the supporting electrical and plumbing services were ripped apart and strewn across the site, piling tent against tent, blocked from blowing even further afield by the north perimeter fence.

I contacted Satbir Cheema, to ask the “what’s next questions,” the same man I had interviewed just the week before when he excitedly spoke about the growing success of the night market and its huge potential.

“On Saturday morning we got a call that some tents were coming apart and we were planning to get to the site when we got a call about twenty minutes later that everything was ruined. So we called all our vendors asking them to come and collect their belongings. Some came right away, while others, with phones, power and the internet down couldn’t be contacted. But eventually they all found their way to the sight and collected what they could.

After operating on Friday night, they were all set up for another evening’s business when the storm hit.

“Some of them, at first, wondered why we were calling them so early,” he said. “But you know we had one stroke of luck in that when the storm hit, the only people on the site were with the security, and no one was injured. But throughout the grounds, people were coming to help and restore or salvage whatever they could.”

Most of the merchandise and food vendors suffered major damage as they were all organized into sections or streets of tents. As for the kiddies park and the entertainment stage, Cheema replied that most of the kid’s attractions are inflatable and as the market was not open for the evening, they were not inflated and thus not damaged. The entertainment stage although thoroughly anchored lost the large canvas to the wind.

“One lucky break though was that all the audio equipment that was provided by Long & McQuade was saved,” Cheema said, “because if that gear had been destroyed we would have been in the hole for another $50,000.”

Every vendor had some loss and I feel sad about that. If they were food vendors they would have food in the fridges, and appliances damaged. The merchandise vendors would have seen damage to merchandise, but I don’t know how much. But everybody experienced some kind of damage including us because all of our equipment, all the tents, all of the plumbing got destroyed.”

Cheema believed that few, if any, had any insurance, and wasn’t certain if this storm was the sort of event they could be insured against.

“We are still looking into that,’ said Cheema. “Still, it’s a lesson for next year. We had encouraged all the vendors to get insurance but I don’t know how many did or did not.”

In an earlier interview, Partner Garry Gerwal estimated the loss to be in the area of $100,000.

Closing for the Season

When they inspected the storm damage, they decided not to rebuild for the few weeks left in this year’s schedule.

“We don’t have the capacity to rebuild the whole thing when our schedule would have us close near the end of October, and we would have to rebuild starting from scratch, so we won’t do that,” Cheema said. “Next year our season will be shorter, starting around the third week of June, and closing about the time the PNE starts. As I said before, there was a sense among the vendors that the season was a little too long anyway, so we’ll see how that works out. This year we ran it 17 weekends, and next year we’ll keep it to around 13 plus or minus weekends.”

Asked about how interested people might help the Surrey Night Market, Cheema replied that he wouldn’t go as far as to ask for donations.

“We’re a business, and we took a hit, and although it’s a big hit, it happens,” he replied. “We are getting so many messages of sympathy, calls, emails and text messages, even asking how they can help, what I’ve said in the media is that we could use some extra hands cleaning up the place.”

The best way to help, Cheema indicated, was to support the Night Market when it starts up next year.

“We’ll be back next year for sure,” said Cheema, “with a beer garden.”