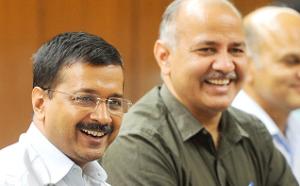 New Delhi, Nov 18 (IANS) Under attack for delaying the tabling of the Jan Lokpal bill in the Delhi legislative assembly, the ruling Aam Aadmi Party on Wednesday cleared the anti-graft legislation — an issue on which the party was formed three years ago.

Sisodia was referring to the anti-graft legislation envisaged and vociferously demanded by social activist Hazare who was supported by Chief Minister Arvind Kejriwal, who was then an activist in 2011.

However, Kejrwal went on to set up the AAP in November 2012, when the Congress-led central government did not concede to Hazare’s version of the bill. Hazare did not approve of Kejriwal’s move.

The bill was cleared by the cabinet on the first day of the winter session of the Delhi assembly, which got off to a stormy start with the BJP demanding tabling of the bill.

Asked when the legislation will be tabled in the assembly, Sisodia said the date would be decided by the Business Advisory Committee.

Until Tuesday, the government was considering pushing amendments to the existing Delhi Lokayukta Act rather than moving for the much-awaited Jan Lokpal Bill, it was learnt.

The bill, which envisages a strong institution of ombudsman, is unlikely to become law soon since it needs the approval of the central government with which the AAP government is locked in a bitter battle.

Officials said the bill was on the lines of the Lokayukta Act in Uttarakhand which Kejriwal had helped to draft in 2011.

The chief minister will come under the purview of the ombudsman under the Delhi Jan Lokpal Bill, they said.

“Time-bound investigation in six months, and attachment of property and assets are some of the key features of this legislation. All other provisions are similar to the Uttarakhand Lokayukta Act,” an official said.

In February 2014, Arvind Kejriwal resigned as the chief minister as the Congress and the BJP opposed the tabling of the Jan Lokpal Bill, citing that the legislation needed the Centre’s approval first.

With the promise of bringing the bill, the AAP again stormed to power in February this year, winning 67 of the 70 seats.

Kejriwal had promised to bring the legislation in the first session of the fresh assembly.