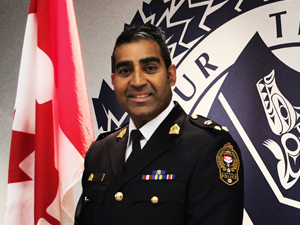 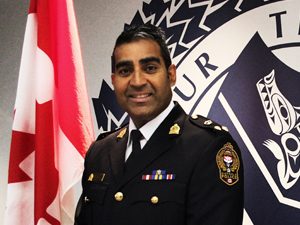 Victoria, BC – The Victoria and Esquimalt Police Board on Tuesday announced that it has appointed Del Manak as Chief Constable of the Victoria Police Department.

Manak has led the department as Acting Chief since December 2015.  He will officially assume the rank of Chief Constable on July 1.

“Acting Chief Manak has demonstrated unwavering leadership and established a strong community presence for the past year and a half through a number of challenging circumstances,” said Mayor Helps, Lead Co-Chair of the Police Board. “His customer service and community engagement philosophy has been embraced by our communities.  The board has determined that he has what it takes to permanently lead as Chief Constable.”

The board did not hold an internal or external competition but rather reviewed Manak’s performance through a 360-review process to assess his performance as Acting Chief. Through the process, and his year and a half in the Acting role, the board determined that he is the right person for the job.

“From his promotion to Deputy, to Acting and now to Chief, Del Manak has worked to ensure both communities are served well by Victoria Police Department. It is fitting that he continue to lead the department and provide excellence in policing through the framework agreement to both the Township of Esquimalt and the City of Victoria,” said Mayor Barb Desjardins.

Chief Manak stated, “It is a tremendous honour to lead the committed officers and staff of this organization.  Having been born and raised in Victoria, I know firsthand the long and proud history of VicPD’s service to its communities. I plan on building on this strong reputation through further engagement and collaboration.”

This is the first time since 1991 (26 years) that a Police Chief has been appointed from within the Victoria Police Department and only the second time in the past 60 years.  The Board is pleased to hire from within and is looking forward to Chief Manak implementing a succession plan that ensures the development and growth of more future leaders for the organization.

Details of the Chief’s contract will soon be available on the Victoria Police Department website.