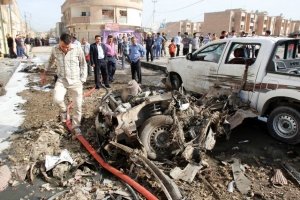 “The latest report concerning the casualties from Monday’s suicide bombing attack near Maqdadiyah rose to 34 deaths and 43 wounded,” the source said.

The suicide bomber wearing an explosive vest detonated himself at a funeral tent in the Shiite village of Brishtah, 100 km northeast of the Iraqi capital of Baghdad.

He added that provincial security authorities imposed a curfew and intensified security measures in numerous villages and towns in the area, including Maqdadiyah, to prevent potential retaliatory attacks.

The source confirmed the death of seven leading figures from the Shia militia, including Ali Hamad al-Temimi, Diyala’s provincial leader from the powerful Asa’ib Ahl al-Haq militia, or League of the Righteous.

The League of the Righteous group is believed to be divorced from the radical Shia cleric Moqtada al-Sadr’s Mahdi’s Army.

IS has frequently targeted crowded areas, including markets, cafes and mosques throughout Iraq.

Iraq is currently witnessing a wave of violence since IS took over areas of Iraq’s northern and western regions in June 2014.

A United Nations report estimated that over 22,300 people were either killed or injured in armed conflict in Iraq in 2015.