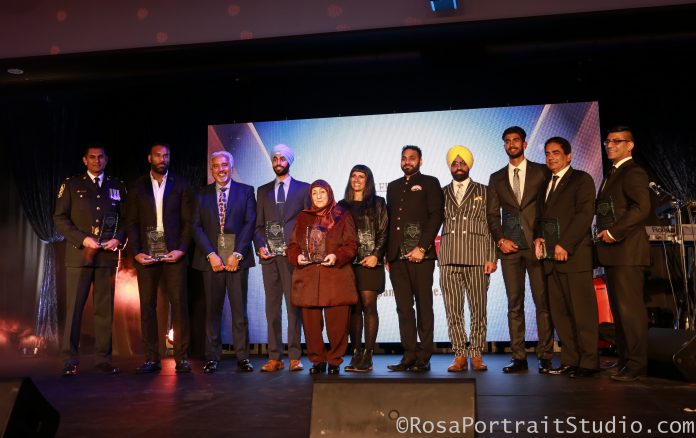 DARPAN Awards 2019 was an extraordinary affair. The Preston Cadillac-sponsored red carpet was buzzing with prominent members of the South Asian community, political dignitaries and socialites; the beautiful cocktail lounge sponsored by WBI Home Warranty had guests mingling and enjoying the hospitality; the awards event and entertainment added pizzazz and exuberance to the soiree. Indeed, the 10th anniversary celebration was a night to remember and cherish.

DARPAN Magazine hosted its 10th Annual Awards in the company of esteemed social, business and political elites. This spectacular red carpet event took place at Aria Convention Centre in Surrey on September 13. With over 700 guests in attendance, this black-tie affair commenced at 6 p.m. in the backdrop of glamour and grandeur. On the red carpet, a live media station interviewed our esteemed guests asking them their expectations for the evening, photographers were busy capturing beautiful moments; and Flamenco performances and magic tricks set the stage for the night ahead.

Ten amazing individuals from the South Asian community were recognized for their extraordinary achievements and for reflecting their heritage in a remarkable way. These 10 South Asians, identified as leaders, who embody the spirit of community and giving back to greater Canadian society, were honoured with the prestigious Darpan Extraordinary Achievement Award. These recipients were:

Canadian actor and television personality Huse Madhavji, who flew in from Toronto, was the Master of Ceremonies for the event. This multi-talented host, actor and producer is the former face of Star! Canada and has starred in HBO Canada/Direct-TV’s hit comedy Call Me Fitz starring Jason Priestly, where he received his first Gemini nomination, and NBC/CTV hospital drama Saving Hope. MC Madhavji kicked off the festivities with his high energy and captivating voice, which included speeches from Canadian Western Bank and Air Canada representatives and City of Surrey Mayor Doug McCallum; closing performance by Punjabi artist Sharry Mann; and the much-anticipated Awards ceremony.

DARPAN Awards proudly presented this year’s Guest of Honour and Keynote Speaker, Dr. Sakena Yacoobi. She is the founder and executive director of the Afghan Institute of Learning (AIL) and co-founder and Vice-President of Creating Hope International, a Michigan-based non-profit organization. Dr. Yacoobi founded AIL in 1995 to provide teacher training to Afghan women, to support education for boys and girls, and to provide health education to women and children. Under her leadership AIL has established itself as a groundbreaking, visionary organization which works at the grassroots level and empowers women and communities to find ways to bring education and health services to rural and poor urban girls, women and other disenfranchised and poor Afghans. AIL supported 80 underground home schools for 3,000 girls in Afghanistan after the Taliban closed girls’ schools in the 1990s. Since 1996, 16 million Afghans have benefited from AIL’s education and health programs.

Dr. Yacoobi has received international recognition for AIL and its achievements. Dr. Yacoobi has six honorary doctorates from various universities, including Princeton University. She was honoured in 2017 with the Sunhak Peace Prize and the Harold W. McGraw Prize in Education in 2016. She is also a recipient of the Opus Prize, Kravis Prize and Gruber Prize. She is a Skoll Social Entrepreneur, Schwab Social Entrepreneur, Ashoka fellow and was nominated as one of 1,000 women for the Nobel Peace Prize. In addition to her work with AIL, Sakena has been a panelist, TEDWomen speaker and an advocate for education of women and children at a number of international conferences, including the Clinton Global Initiative, California Governor’s Conference on Women and Families, and the Central Eurasian Studies Society conference at Harvard University.

Also spotted at the event were prominent political guests like B.C. Minister of Citizens’ Services Jinny Sims; MLAs Stephanie Cadieux, and Marvin Hunt; and MPs Sukh Dhaliwal and Randeep Sarai, among many others.