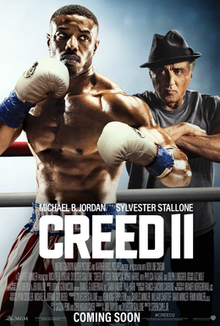 Step into a Cineplex Cinema anywhere in B.C. to see Creed ll and  it’s as if your reliving history. Expect Warner Brothers to clean up this holiday season with the underwater saga Aquaman from visionary director James Wan and world-wide Hollywood icon Clint Easton to get down and dirty and murky In The eventful drug saga The Mule which seems to be now relevant than ever. And what better way to get an early jump on the holiday season with the inspirational Creed ll.

Picking up where the surprise first Toronto shot Creed blockbuster left off, wounded warrior Adonis Creed looks like a man lost in space. Despite being the world champ Michael B. Jordan sure looks like a chump when a little-known Russian fighter decides to challenged the champ. Unbeknownst to Adonis this Russian menace who goes by the name of Victor Drago has quite the pedigree.

Not so slick but definitely on the sick side is Florian Manteau who is just an animal inside the ring. Talk about a chip off his father Ivan’s block.  Yes, that Ivan who made quite an I oac taking on Rocky way back when. Think of the hostility between two washes up fighters well embodied by Dolph Lundren and Sylvester Stallone. You just know that somehow, some way th3se two aging wonders will be able to relive their glory days (sorry Bruce) when the two young bucks do battle on the main stage.

Exciting boxing footage inside the ring and training regimens that harken back to those frozen beef side assaults by the Italian Stallion help make Creed ll meaningful, poignant, realistic and a lot of fun. Grudge matches never felt so good or liked so painful for the fighters. And bringing in Adonis’ family just helps make the story all the more interesting and compelling. Quality acting with heart is what Creed ll is all about. And it just shows you how good a writer Sylvester Stallone really is. It’s a knockout!