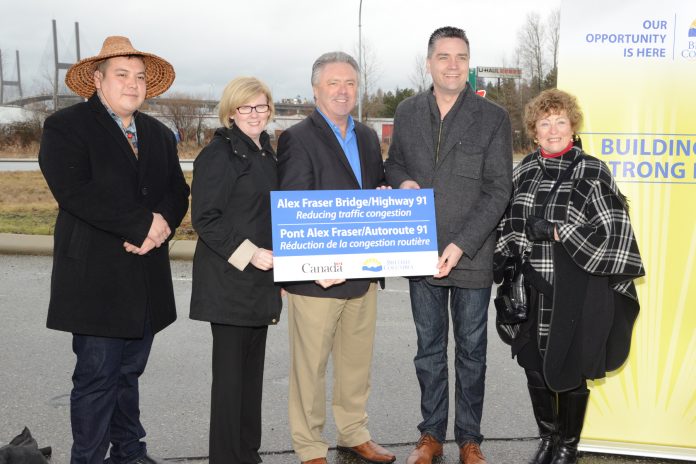 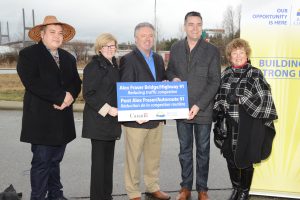 The creation of a movable, counter-flow, (seventh) lane for the Alex Fraser Bridge is the solution to reduce rush hour gridlock.  The announcement by Todd Stone, the BC Minister of Transportation and Infrastructure (MoTI), and Carla Qualtrough, MP for Delta and Federal Minister of Sport and Persons with Disabilities, was a commitment of $36 million from the province and $34 million from the federal government.

Minister Todd Stone of MoTI provided the details of the funding and traffic mitigation project.

“Last June we gathered at this spot,” said Stone, “to commit to a number of strategies to cut congestion at the Alex Fraser bridge. “We looked at a way to add capacity to this crossing which sees over 119,000 per day, resulting in 3.5 kilometre lineups during the morning and evening rush hours.”

Stone said the addition of a movable counter-flow seventh lane will dramatically increase the flow of commuter traffic and goods movement. In the morning the north-bound four lane configuration will be in place, and will be reversed in the afternoon, remain that way through the rest of the day.

“We will use the state of the art technology, a Movable Barrier System, similar to that used on the Golden Gate Bridge in San Francisco,” said Stone.

The additional lane will be achieved by reducing the width of each of the six lanes slightly and removing the shoulders. Lanes will still be slightly wider than those on the Oak Street and Second Narrows bridges.

“The posted speed limit will be reduced to 70 kilometers per hour from the current 90 kmh to maximize safety on this crossing,” Stone said.

The project will go to tender this spring and he expects to have the increased capacity in place by the Spring of 2018.

To address the “rat-running” issue through Annacis Island, MoTI installed a signalized right turn at the Highway 91 Southbound off-ramp to Cliveden Avenue, and reminded that work is underway on the $30 million federal/provincial project to build the interchange at 72nd Avenue, and remove the last remaining traffic signal on Highway 91.

Minister Stone reiterated that work will begin on the Massey Tunnel replacement bridge later this year, and that they will continue to work with the government of Canada and the Port of Vancouver to advance new interchanges at Highway 17 and Highway 91 connectors to improve the flow of commercial and commuter traffic through those areas as well.

In one final announcement, Stone said that Delta North MLA, Scott Hamilton, will hold meetings with stakeholders and community representatives, local government officials, First Nations, Chambers of Commerce and other community leaders, to focus on issues of traffic congestion, population growth, highway safety, cycling connections and port traffic, to provide feedback on the priorities for the ten year transportation plan for the south of the Fraser region.