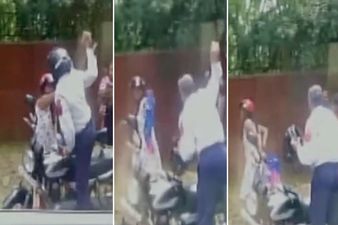 New Delhi, May 11 (IANS) A Delhi traffic policeman was on Monday sacked after he attacked a young mother of three with a brick when she refused to pay a Rs.200 bribe. The shocking incident of bribery and police brutality was caught on camera and triggered outrage.

As the video went viral, Delhi Police first hurriedly suspended Head Constable Satish Chandra and then arrested him amid mounting calls that he should be dismissed or compulsorily retired from service. By late evening, he was sacked from service.

The incident occurred just after noon when 30-year-old Ramandeep Kaur was returning home with her three daughters from Guru Harkrishan Public School after attending a parents-teachers meeting.

Kaur told IANS that when she took a turn on Golf Links Road, the policeman stopped her and accused her of jumping a red light.

“He asked me to pay Rs.200. I told him to give me a receipt but he said I will have to shell out more if I wanted a receipt. He said he would settle the matter if I paid him Rs.200.

“I refused and told him to issue me a challan which I will settle in court. I walked away. This angered him. He first kicked my scooty and when I objected, he picked up a brick and hurled it at me,” Kaur said.

The policeman also twisted her arm, causing a fracture.

Unknown to the policeman, a motorist filmed the ugly drama. The clip, which went viral on news channels, showed the woman grappling with the cop even after being hit to prevent him from escaping on his motorcycle.

According to Kamal Kanth, the man who shot the video, the woman was riding her two-wheeler with her young daughters.

Kamal Kanth said the policeman first demanded the woman’s driving license. She gave him a photocopy. She said she did not have the original and began walking away.

“He pulled her. She got angry over that and hit the policeman’s bike with a stone. The policeman then lifted a huge brick and flung it on the woman’s back with force in front of her daughters including an infant.”

As the woman shouted for help, people who gathered there overpowered the policeman, said Kamal Kanth. Other police personnel then reached the place and detained him.

Police Commissioner B.S. Bassi expressed regret over the incident on behalf of the police department. He said a criminal case had been filed. “Strict action will be taken against the head constable.” The constable was sacked under article 311 (2)(b) of the Indian constitution.

Kaur was taken to Ram Manohar Lohia Hospital where her fractured left hand was plastered.

The woman’s husband, Gurdeep Singh, told IANS that the policeman had aimed the brick at his wife’s head.

He said his wife was riding the scooter with their three daughters – Yamini (13), Gagandeep (7) and Gurpreet (four months).

“The policeman attacked my wife with a brick due to which she has received injuries on her back and hand,” he said. “I want him to be sacked.”

The home minister in the Delhi government, Satyendra Jain, said the brutal attack exposed the “barbaric” face of Delhi Police.

“The barbaric face of Delhi Police, exposed by this act, raises very serious questions about the conduct of its personnel,” said the Aam Aadmi Party leader.

Former Delhi Traffic Police chief Kiran Bedi said: “It is necessary to send the constable on compulsory retirement. You can’t have angry, stressed-out policemen on duty.”