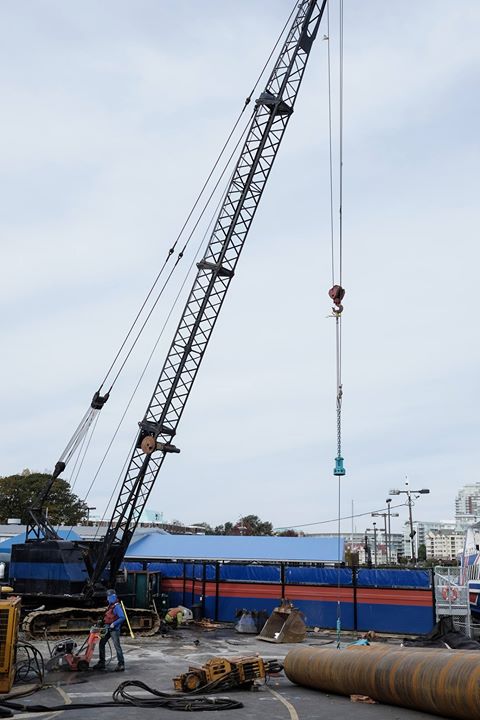 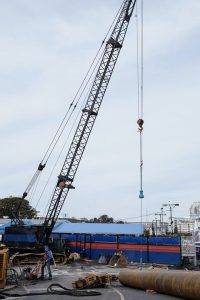 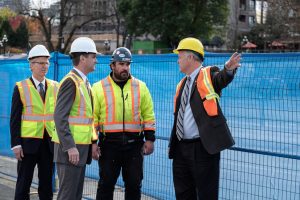 Victoria: A crane is now in action at the Belleville ferry terminal, marking the beginning of long-awaited improvements to the ferry terminal properties, starting with repairs to the wharves used by the MV Coho ferry, Transportation and Infrastructure Minister Todd Stone announced today.

“It’s great to see that construction is finally happening at the Belleville ferry terminal properties, starting with upgrades to maintain the safety of the wharves,” said Stone. “The Belleville Terminal is a key ‘Pacific Gateway’ entry point to B.C. and we want passengers arriving from U.S. destinations to be safe and feel welcomed and excited when they arrive in the heart of the provincial capital.”

B.C. on the Move, the Province’s new 10-year transportation plan, has identified the wharf repairs and revitalization of the Belleville Terminal as a priority project. The $17.4-million project is being cost-shared between the Province, the Black Ball Ferry Line (MV Coho) and Clipper Navigation Ltd. Construction on the Black Ball wharf involves replacement of the existing timber piles and deck structure with new steel pipe piles with a precast concrete deck. It will also include a covered passenger walkway, a new vessel loading ramp and berthing dolphins, and upgrades to the terminal parking area.

“Black Ball Ferry Line and its employees are pleased to partner with the Ministry of Transportation on this important infrastructure upgrade,” said Ryan Burles, the president and chief operating officer of the Black Ball Ferry Line. “The new marine dock and long-term lease sets the foundation for growth of our vital ferry link for tourism and trade between British Columbia and the United States. We look forward to continuing to proudly serve our customers and this region for generations to come.”

Upgrades to the Clipper wharf will include the replacement of deck panels and pile caps, as well as maintenance work to the floats and passenger access platforms.

“We are delighted to see the efforts and vision of so many, including the Province, the City of Victoria, Tourism Victoria and our friends at the Black Ball Ferry Line come to fruition at this ground breaking,” said David Gudgel, chief operating officer of Clipper Navigation Ltd. “This co-ordinated effort will ensure our ability to serve Victoria for years to come.”

The Province is working in partnership with the ferry operators, the City of Victoria and stakeholders to establish a joint vision of what a new and improved Belleville Ferry Terminal will eventually look like.

“We’re thrilled to see the improvements to the wharves underway; this is a significant milestone for Victorians and our visitors alike,” said Victoria’s mayor, Lisa Helps. “We thank the minister for his leadership on this project and the government for this important investment in the capital city. We look forward to working together to get the next phases of the project underway soon.”

The Province has signed a 60-year lease with the Black Ball Ferry Line to ensure this valuable ferry service between Victoria and Port Angeles continues. Long-term lease negotiations are underway with Clipper Navigation Ltd., and should complete following consultation with First Nations. The long-term leases will allow the ferry companies to operate well into the future, creating trade and tourism opportunities between the U.S., Victoria and Vancouver Island.

“Belleville Terminal is a key priority for our industry and the destination, and has been for a number of years,” said Paul Nursey, president and CEO of Tourism Victoria. “The Victoria Clipper and Black Ball Ferry Line bring more than 675,000 people to the Inner Harbour each year, with an estimated combined economic impact of $180 million annually. In 2013, Tourism Victoria’s Transportation Committee, a powerful committee with a broad group of transportation stakeholders, released its Passenger Gateway Strategy and industry has coalesced around the revitalization of Belleville Terminal. I’d like to congratulate the ferry operators, the City of Victoria and the provincial government on collaborating on this important file. It is great to see certainty in this area as well as investment in the destination.”

Construction on the Black Ball wharf began this month and is expected to be completed within two years. Repairs to the Clipper wharf will start this winter and should be completed in winter 2017.