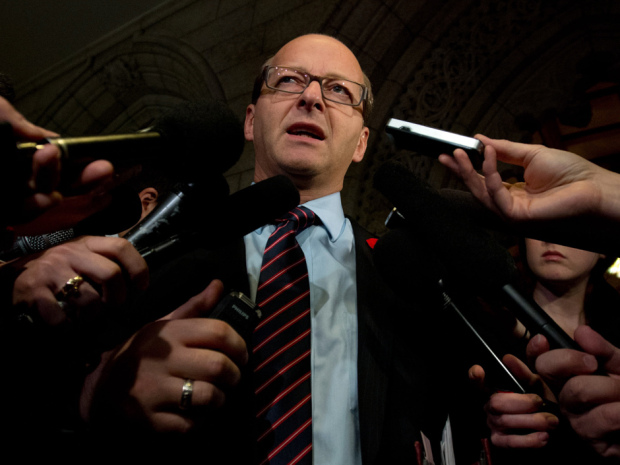 OTTAWA: Conservatives in the Senate have used their majority to overrule their own Speaker and force a final vote on a controversial labour bill.

Claude Carignan, the Conservative leader in the upper chamber, was backed by all but six of his own senators in shooting down a ruling by Speaker Leo Housakos that would have prevented the government from ending debate on Bill C-377.

The bill would require unions and labour organizations to publicly disclose the details of their spending, including how much they spend on political activities.

Allowing the government to shut down debate on private member’s bills like C-377 would violate the basic principles of how the Senate operates, Housakos said in his ruling Friday.

He cited one of his predecessors, Noel Kinsella, who ruled two years ago that the government couldn’t shut down debate on a motion to suspend senators Mike Duffy, Patrick Brazeau and Pamela Wallin.

Allowing such an act would be an overreach of the governing side’s power and would have a “profound effect” on the Senate’s operations, Kinsella said at the time.

Seconds after Housakos delivered his ruling, Carignan announced he wanted to appeal to the Senate as a whole, which can overrule a Speaker’s decision. Carignan won by a vote of 32-17.

Housakos and Sen. Diane Bellemare were the only Conservatives to vote in favour of the ruling, with Bellemare receiving a round of applause from Liberals when she cast her vote.

The Opposition Liberals had worried the Conservatives would use their majority in the Senate to force a final vote on C-377 and pass it despite opposition, including from seven provinces who feel the bill is unconstitutional.

“When they can’t win according to the rules, they change the rules,” said Senate Liberal leader James Cowan.

“What we’re doing is allowing the government to do indirectly what it cannot do directly.”

The Liberals in the Senate had planned to filibuster the bill deep into the summer to prevent a final vote.

Conservative Sen. Don Plett told the Liberals it was “simply undemocratic” to hold up a bill “through procedural tricks simply because you disagree with the bill,” a comment that caused an uproar on the Liberal benches.

“Let’s get a grip here and let’s remain civilized,” he pleaded. “Let’s keep the decorum at a high level.”

It was exactly two years ago Friday that the Senate gutted C-377 at third reading.

The amended bill returned to the House of Commons, but MPs never had a chance to review the changes: The government prorogued Parliament, which sent the bill back to first reading in the Senate.