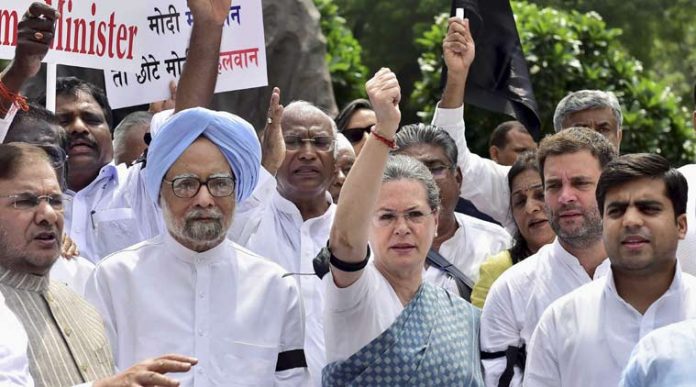 New Delhi, Aug 7 (IANS) The Congress party on Thursday tore into the Narendra Modi government, saying its “arrogance of power reached its zenith” when it asked External Affairs Minister Sushma Swaraj to “explain away her unpardonable impropriety, willful lies, criminal intent, gross misuse of office and patent conflict of interest in the garb of ‘humanitarian grounds’ to help Lalit Modia.

Sushma Swaraj on Thursday made a passionate defence of her role in the Lalit Modi affair, but the Congress termed her arguments as “hogwash”.

The party accused the Modi government and Sushma Swaraj of “once againa misleading the country “shamelessly and unabashedly”.

The party said that Sushma Swaraj was maintaining a family relationship with Lalit Modi, a fugitive of law, a FEMA violator and a money-launderer for the last over 20 years, both as a leader of opposition with cabinet status and then as the union external affairs minister.

In July 2014 itself, Sushma Swaraj herself spoke to British Envoy, James Bevan to help such a fugitive get travel documents from the British government. She, in the process, over-ruled all objections of the government of India qua repatriation of Lalit Modi to face prosecution in India.

She did not consult even the then Foreign Secretary, Sujata Singh, or her own ministry. She also chose not to consult the finance ministry or ED or DRI before overruling the objections originally raised and communicated to the British government by finance ministry, it said.

It said her daughter was counsel for Lalit Modi in this case before the division bench when it was decided against decision of foreign ministry confiscating the passport.

Sushma Swaraj, by her humanitarian gesture’ (as she says), has permitted a fugitive and money-launderer not only to travel from Britain to Portugal but also facilitated his travel for holidays to resort town of Ibiza (August 4, 2014) and back to his hideout in Britain to escape the Indian law and authorities, who, according to the finance minister, were chasing him for arrest.

He said the UPA government through its then finance minister, P. Chidambaram, wrote two letters to Chancellor of Exchequer George Osborne asking him for action against Lalit Modi besides following it up with a personal meeting between India’s finance minister and chancellor of exchequer, Britain. But Sushma Swaraj overruled the objections given earlier by the government of India.

External Affairs Minister Sushma Swaraj could not have withdrawn the written communications of the government of India written through the then finance minister without prior consent of the present finance minister and Prime Minister Narendra Modi, leading to grant of travel documents to Lalit Modi. Tacit approval of the Prime Minister is, thus, writ large?, the Congress said.

The Congress continued its protest inside and outside the parliament for the third successive day on Thursday over suspension of its 25 MPs from the Lok Sabha as Congress president Sonia Gandhi and party vice president Rahul Gandhi mounted a fresh attack on the Modi government over Naga accord, saying it had not consulted party governments in Assam, Manipur and Arunachal Pradesh.