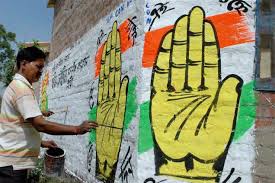 The Congress’s 130th birthday, which was observed by the party on Monday, could not have been a happy occasion. True, the party has lately shown faint signs of life after its humiliating drubbing in the 2014 general election.

It fared much better, for instance, in the Bihar assembly elections than it has done in recent years and has been able to establish itself in rural Gujarat for the time being at the Bharatiya Janata Party’s (BJP) expense.

The Congress has also performed satisfactorily in an assembly by-election and in several local bodies in another BJP-ruled state – Madhya Pradesh.

But these few swallows do not make a summer. In Bihar, the “national” party came a poor third to the two major regional parties – the Janata Dal-United and the Rashtriya Janata Dal – and there is little chance that it will be able to move ahead in the near future.

Elsewhere in the Hindi belt, such as in Uttar Pradesh, it occupies the third or even fourth place behind the Samajwadi Party, the Bahujan Samaj Party and the BJP.

Since the scenario is virtually the same from West Bengal to Tamil Nadu via Odisha, where the regional parties rule the roost, the Grand Old Party can hardly be regarded as a national party any more.

It is not all that difficult, however, in its time of distress, to pinpoint the root cause and even the very day – of the Congress’s decline and fall. The fateful date was June 26, 1975, when prime minister Indira Gandhi suspended all civil rights by promulgating the emergency.

“Please do not destroy the foundation that the Father of the Nation, and your noble father, had laid down”, sarvodaya leader Jayaprakash Narayan, told her. “You inherited a great tradition, noble values and a working democracy. Do not leave behind a miserable wreck of all that. It would take a long time to put all that together again.”

It did not take long, however, to put democracy back on track, for the people of India, in their great wisdom, evicted Indira Gandhi and the Congress from power in the general election of 1977.

Although the party and the mother-and-son duo of Indira and Sanjay Gandhi returned to the corridors of power three years later, the Congress was described as a party of “power brokers” by prime minister Rajiv Gandhi during the party’s centenary celebrations in 1985.

Unlike the present occasion, the party did have reasons to celebrate at the time, but the storm clouds were already gathering over its future. The Congress lost power in 1989 and despite occasional sojourns in office since then – between 1991 and 1996 and between 2004 and 2014 – it has become a pale shadow of its former self for having been unable to secure an absolute majority on the two occasions, let alone win 415 of the 543 elected Lok Sabha seats with a 48.1 percent vote share as in 1984.

Why the downhill slide? Several reasons can be mentioned. One is apparently the belief among the voters because of their 1975 experience that the party cannot be entrusted with total power any more.

It is not impossible that this belief has been strengthened by the admiration for Indira Gandhi expressed by her grandson, Congress vice president Rahul Gandhi. “She is my role model”, he has said, adding that he would have acted like her as when she faced “severe assault” by “destabilizing forces”, which was the standard explanation for her draconian measures in 1975.

It is noteworthy that while other Congressmen have been mildly critical of the Emergency – Jairam Ramesh said it was a mistake because it enabled the Rashtriya Swayamsevak Sangh to enter the mainstream – the party’s first family has been largely silent.

A second reason why the Congress is stumbling is its familiar tryst with corruption. It has lost power twice in recent years because of its association with sleaze – in 1989 when the Bofors howitzer scandal brought down the Rajiv Gandhi government and in 2014 when the plethora of scams led to the Manmohan Singh government’s ouster.

In addition to its authoritarian trait, as demonstrated in 1975, the party has always had to continuously battle the perception of being corrupt.

The third, and perhaps the most crucial, reason is its pathetic dependence on the Nehru-Gandhis which has turned a “mass movement into a feudal oligarchy”, to quote from Rajiv Gandhi’s 1985 speech.

Rajiv Gandhi was referring to people outside his family, but it is the latter which has saddled the party with the burden of feudalism. What is worse, unlike the charismatic members of the family of the past who had wide acceptability despite their faults because of the party’s tradition of secularism and their role in building democratic institutions – till 1975 – the present generation lacks the earlier wide appeal.

And the reason is that they have shown neither the intellectual prowess of Jawaharlal Nehru nor the grit of Indira Gandhi, which was best demonstrated during the liberation of Bangladesh and the worst in 1975.

Instead, the present mother-and-son duo of Sonia Gandhi and Rahul Gandhi resembles a decaying zamindar family surrounded by a band of servile courtiers who are out of touch with the outside world.

Salman fails to appear before NCW, files response via lawyer