Surrey: Last Saturday evening around 10:30, the Surrey Fire Department started receiving emergency calls that the Celeste Complex, near Scott Road and 82nd Ave, was on fire, and flames were spreading quickly.

At it’s peak, a fourth alarm was called as the roof of one of the 77 suite buildings became involved and fire was threatening another 40 suite complex immediately to the south.

When it was over, the roof structure was described as significantly damaged, with some parts collapsed, and over one hundred people were unable to go home.

Fortunately, no one was injured or killed in the blaze that the Surrey Fire Service have deemed to be not suspicious and which began on a balcony on the second floor. A fire investigator has not been able say what caused the fire, but has ruled out a BBQ as the cause.

The fire was reminiscent of another condo complex fire in North Surrey last September where fire began on a balcony and ran up the side of the building into the attic, involving the structure’s roof, damaging 68 suites and necessitating the rescue of some residents from their balconies.
Surrey Councillor, Bruce Hayne, expressed his concern and commented on what might be done to reduce the risk of such events.

“Certainly it’s a concern to Fire Chief Len Garris,” said Hayne. “I was speaking with him the other morning. There’s a lot more multi-unit wood frame residential going up. In fact, at UBC there’s a 12 or 14 story wood frame building, the first of its kind, that’s just been completed. High rise, or higher rise, wood frame buildings require exterior sprinkling equipment, however the current building code for low-rise wood frame does not require external sprinkling.”

Hayne added that it’s something Chief Len Garris is trying to address with his counterparts across the province as well as with the government to change the building code, and if necessary, where internal sprinkling is required, retrofit low-rise wood frame buildings to include external sprinkling.

In the 2015 fire, and the one on Saturday, it seemed that the fire moved very quickly up the building and into the attic. Hayne was asked what sprinkling would look like?

“I guess it depends on what the exterior cladding is made of,” responded Hayne. “Some older condos are painted cedar so you can imagine that it would go up pretty quickly, particularly in the summer months. Some of the newer building materials are far more fire retardant than wood.” 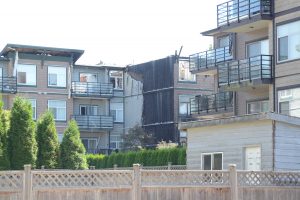 “My understanding is that each balcony would be sprinklered,” he continued, “because unless it’s arson, the only logical place for a fire to start externally on a building would be on a balcony either by a carelessly discarded cigarette or a barbeque.”

Hayne said that the Council is on summer break until September, but it would certainly be something in our Public Safety Committee to ask for an update from the fire chief and take it from there.

One of the major issues that still needs to be addressed is whether or not the building codes concerning the new roof styles are adequate to protect against the rapid spread of fire across buildings once the roof is involved.

We were unable to reach a spokesperson at the Surrey Fire Service, due to vacations. We will continue to follow up and report on this issue at a later time.

Patrick Brazeau arrested on charges of assault and cocaine possession