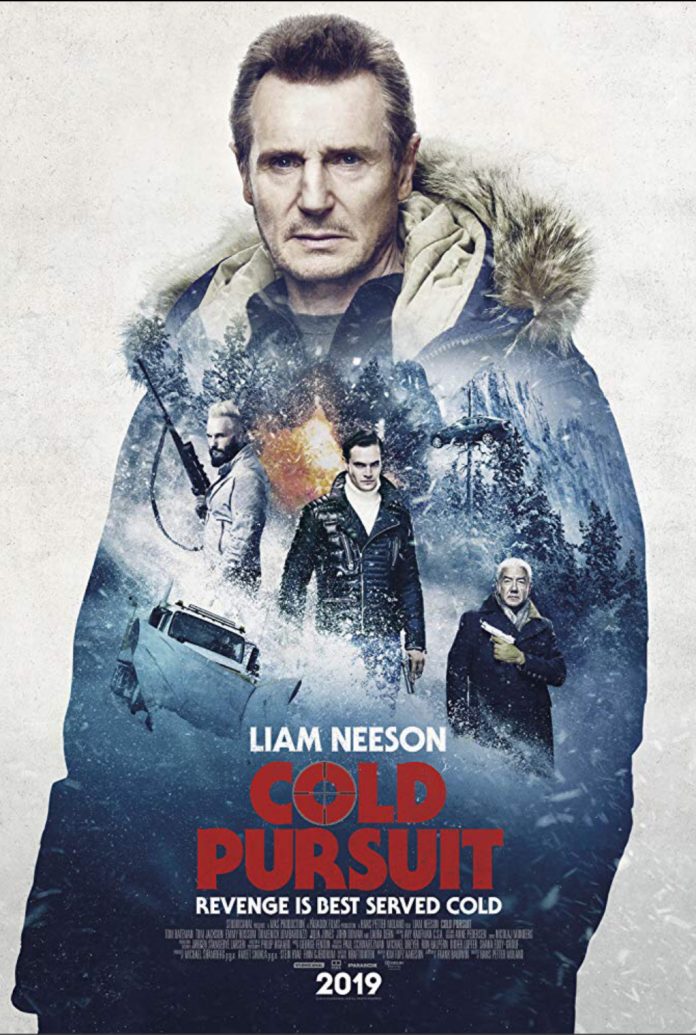 Just how well do you know your family? That’s the six million dollar question the main character in Cold Pursuit must decide. Here we have another hit European film being remade for a North American audience. Action fans who may have missed the original Norwegian thriller may find this Elevation Pictures release prime time viewing at countless Cineplex Cinemas and Landmark Theatres around B.C.  You be the judge.

Overexposure can be a problem for any actor as they can get stereotyped or pigeon-holed into a role or character. On the latter count Sean Connery tried desperately (and in my view in vain) to escape his James Bond Mr. Kiss Kiss Bang Bang persona. Now Liam Neeson again takes to the screen as Nels Coxman, an aggrieved dad and respected man about town living in a small resort outside of Aspen Colorado.

Unbeknownst to this stand-up guy and wife Laura Dern apparently their son was just a touch wayward. So, when the poor boy goes missing and winds up dead it’s up to good old dad to settle the score. Cut from the same cloth as Dirty Harry and using the Charles Bronson playbook it doesn’t take long for Coxman to learn how to kill. Heaven help the local gangsters whose richness and excesses pale in comparison to one determined dad.

Largely a carbon copy of a real great Norwegian thriller this made in B.C. actioner simply has Neeson going through the motions. Despite some campy charisma displayed by the main gang leader heavyweight and a rival gang confrontation put simply this film isn’t as good or fresh as the original if you can overlook the subtitles. So if you haven’t see The European version and can’t get enough of Liam, who does look good in the restrained action arena, Cold Pursuit May do the trick for a couple of hours of mindless mayhem before the deep freeze sets in.