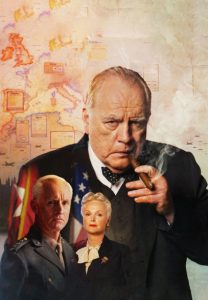 Leaders come and go. Thought by many to be the greatest leader Britain ever had was Winston Churchill. Relive the iconic cigar chomping bulldog in the appropriately titled Churchill. Presented by Mongrel Media this sensational look into a historical icon is clearly making waves at the International Village Theatre for a limited engagement.

Instead of doing a total bio on this one of a kind man the filmmakers here wisely chose to depict a short though important interval in the man’s life. Under the supreme tutelage of Brian Cox the depths of this Prime Minister’s reservations about the D-Day invasion of France are brought to the fore.

High drama is in the line as Britain is asked, no that’s not quite the right word, cajoled into this dangerous mission. Behind the scenes we go as # 10 Downing Street’s most famous, resident needs to wrestle with his conscience, his family as well as military leaders who may or may not share the revered politician’s few on launching those ships across the channel. War rooms and palace intrigue will never be the same.

Thoughtful, emotional and a powerful performance by Brian Cox help make Churchill an inspirational story of a one of a kind man.