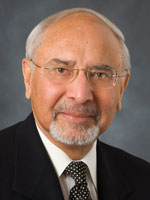 “When I think of John Nuraney, one word comes to mind: gentleman.

“No matter the interaction, John Nuraney dealt with people in a way that made them feel important and honoured. He was a man who epitomized traits we don’t often hear used anymore: class, grace, and principled.

“That spirit was a testament to who he was and was determined to always be. After having his business and assets seized by Mobutu Sese Seko’s corrupt government in Zaire, John saw a better life for his family halfway around the world and seized the opportunity.

“British Columbia was lucky he chose us. John arrived here with nothing, but you can’t keep a man of his talent down. He was a tireless entrepreneur, philanthropist, and champion of causes from the theatre to a school lunch program for hungry kids.

“John was more than just a colleague – he was a mentor, and a friend.  My thoughts are with the Ismaili community, who lost one of their most respected leaders, but especially with John’s family. Above all, John was a proud husband, dad, and grandfather. Through them his legacy of compassion will continue.”

The virtual glamour of the 15th Brian Jessel Bmw Cabriolet...