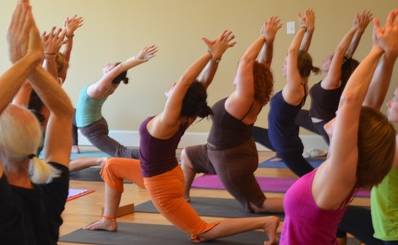 New Delhi, May 4 (IANS) The Chinese are taking to yoga in a big way, if what their officials here say are an indication. Of late, yoga has been gaining ground in China despite its traditional tai chi fitness practice. Even First Lady Peng Liyuan is said to be learning and practising yoga.

More and more officials and their families in the Chinese embassy here are turning to yoga for sound mental and physical health.
“We have arranged for an Indian exponent who is holding a yoga class once in a week in the embassy,” press counsellor Xie Liyan told IANS.

She said 35-40 people, comprising mainly the embassy staff and their family members, have been attending the classes for the past few months.

“Some of the exercises like breathing are quite tough and hard. We are asking for light exercises. But yoga is really relaxing and helps keep the body fit,” she added.

Minister Counsellor Cheng Guangzhong, who is in India for over a year, said almost every major city in China now has several yoga learning and practising centres.

“Two Indian teachers are holding yoga classes in my hometown. They are saying yoga is generating much interest like learning English among the Chinese, mainly the youngsters,” he said.
Xia said the yoga class in the embassy is held in the evening.

“The purpose of holding the class in the evening is to get relaxed after calling it a day. Physical or breathing exercises help recovering inner peace and energy. This of course helps me become more effective,” she said.

Indian officials say the country will hold one of the biggest global yoga meets in China’s Sichuan province on June 17-21 to celebrate the UN’s first “International Day of Yoga”. Promotion yoga is likely tob be discussed during Prime Minister Narendra Modi’s visit to China May 14-16.

Books by renowned yoga exponent B.K.S. Iyengar, which have been translated into Mandarin, are also said to be quite popular in China.

According to Asia Weekly, a publication of China Daily, a yoga school will be established at Yunnan Minzu University in Kunming, the capital of Yunnan. Students will have access to courses including Indian philosophy, Indian religions and yoga culture.

It said the decision to start the yoga school was made during the 10th K2K (Kunming to Kolkata) Forum, held in Kunming last November 25. The forum is jointly run by the governments of Yunnan province and India’s West Bengal state.

Cao Chenrui, dean of Yunnan Minzu University’s South Asian Institute, says this will be the first yoga school at a Chinese university.

Yoga has become popular among Chinese people in recent years, with a number of gyms and training centres providing yoga courses, mostly at high prices. For example, Yogi Yoga charges 1,000 yuan ($160) for a week’s lessons at three of its branches in Beijing, Asia Weekly said.

Some yoga clubs and organizations have been established in China’s universities, providing courses to yoga amateurs – mainly college students. For example, the Tea Yoga Club in Peking University, established in 2010, has more than 100 members.
The UN General Assembly last December adopted a resolution, moved by India, declaring June 21 as “International Day of Yoga”
The UN recognised that yoga “provides a holistic approach to health and well-being” and that wider dissemination of information about benefits of practising yoga would be beneficial for the health of the world population.

Karan Johar was stunned at my Hindi: Lauren Gottlieb