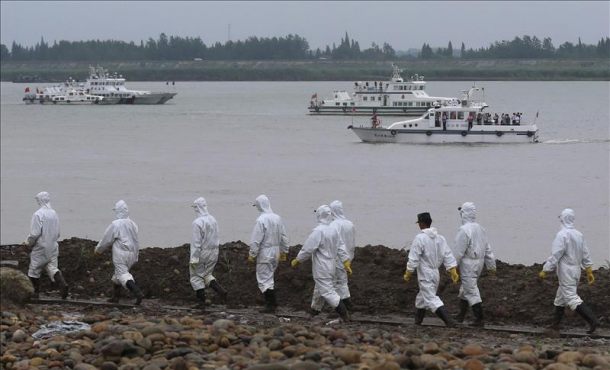 Beijing, June 3 (IANS) Chinese authorities were on Wednesday still hopeful of finding survivors from a passenger ship that capsized on Monday night in the Yangtze river, Efe news agency reported.

Rescue works were in full swing to locate the more than 400 missing passengers from among the 456 people on board the ship that capsized in the turbulent river during a cyclonic disturbance.

“Although it is very difficult, the aim right now is to find the survivors. There is still hope,” Jian Li, deputy director of the information office of the China’s ministry of foreign affairs, told reporters.

There were currently two rescue ships at the accident site with three more expected to join them.

“When there are five (ships), the experts will evaluate the situation. Not only regarding the (capsized) ship but also the weather, the state of the river,” Jian explained.

More then 36 hours after the ship capsized, heavy rainfall in Jianli county has left a large part of the area submerged and reduced visibility on the river waters.

Up to 180 divers and 202 special forces members were trying to analyse the water and the condition of the ship.

Authorities were weighing the possibility of opening holes in the part of the keel of the ship that is above water with the risk that it could raise the water level inside the ship.

Another option being considered was using the rescue ships to turn over the capsized ship or try to pull it to the shore, Jian said.

Meanwhile, family members of the passengers waited anxiously in nearby hotels for updates by the government on the rescue mission that involves 4,600 soldiers and firefighters.

The latest official data pegged the death toll at 18 and survivors at 14 leaving 424 people still missing in what could end up being the worst shipwreck in China’s history.

City of Vancouver is ready for weekend snowfall