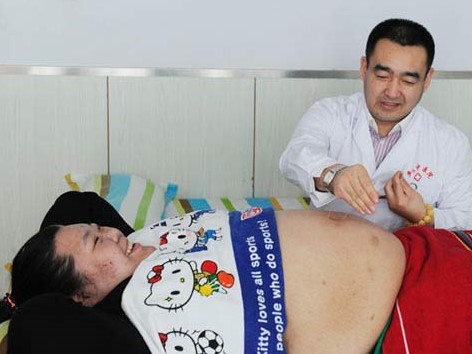 Beijing, Nov 16 (IANS) A 31-year-old believed to be China’s heaviest woman is looking forward to finding love after a drastic surgery aimed at helping her lose weight, the media reported on Monday.

Having tried many other ways to shed the fat, Lu Weishan, weiging 244 kg, had gastric bypass surgery in Changchun city, capital of Jilin province, earlier this month, China.org reported.

“I’ve never felt full,” she said before her surgery. “I can’t help stuffing myself.”

Lu was 15 kg heavier than her fellow primary school students. By high school, her weight had reached 95 kg; the figure climbed to 149 kg at college.

“Many of my friends have fallen in love and gotten married, but I haven’t ever dared to think about it,” she said.

Lu hid at home for six years until last month, when she heard of the surgery.

“The sooner you receive weight-loss surgery, the better. Otherwise you might die before your 40s,” Lu’s surgeon, Jiang Tao, told her.

“(Gastric bypass) is a common weight loss surgery in the United States. Such a restrictive strategy should help Lu shed 60 to 70 percent of her excessive weight in a year,” Jiang said.

“She’s doing quite well now. She’s able to get up and have some liquid food,” Jiang added.

“With a nutritious diet, she can reduce her weight even more in the future.”

China has 46 million obese adults, according to the Chinese Academy of Social Sciences.