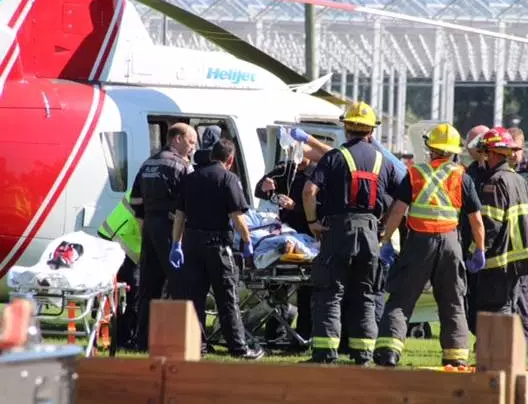 Vancouver: The Transportation Safety Board says a driver distracted by a cell phone and confusion over a complex railway crossing caused a Canadian National train to strike an ambulance in Langley, B.C.

An 87-year-old patient who was being taken to hospital from a long-term care facility died after the crash on Sept. 11, 2015.

The TSB says the ambulance entered an intersection when a crossing bell was ringing, lights were flashing and the gates were descending.

The board’s report says the driver’s cell phone was active at the time.

The agency says the ambulance driver was intending to make a left-hand turn at a green light but stopped on the track when a lowered crossing gate appeared to be blocking the way forward.

An examination of the scene revealed motorists were getting conflicting information because a red signal at the crossing indicated an approaching train required them to stop while a green traffic signal suggested they could proceed when it wasn’t safe to do so.