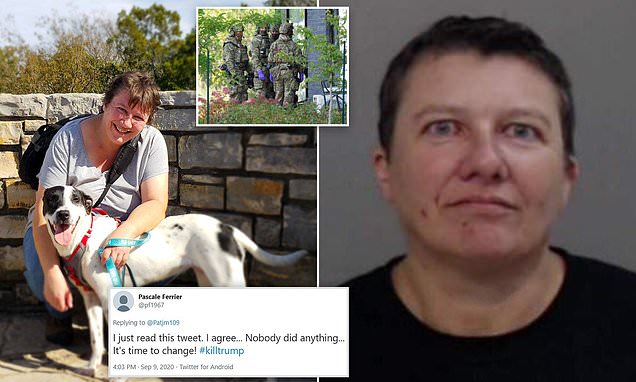 By Jacob Serebrin and Sidhartha Banerjee

A Quebec woman suspected of mailing envelopes containing the poison ricin to the White House appeared in court Tuesday on a charge of threats against the president of the United States.

Pascale Ferrier, who wore a tan jail jumpsuit, had her hands in cuffs and a chain around her waist during her brief court appearance in Buffalo, N.Y. A blue mask covered much of her face as she gave only “yes” and “no” answers.

Timothy Lynch of the U.S. Attorney’s Office in Buffalo told District Court Judge Kenneth Schroeder Jr. that the prosecution would be arguing for Ferrier’s detention, given the nature of the allegations and the fact she is a foreign national.

“The charge in the criminal complaint is a crime of violence,” Lynch said. “The defendant is a serious risk of flight.”

Officials in the United States say the letter sent to Washington, D.C., was intercepted on Sept. 18 before it reached the White House.

In a sworn affidavit to obtain the arrest warrant, an FBI investigator wrote the envelope contained a powdery white substance with a letter to President Donald Trump, calling him “The Ugly Tyrant Clown.”

The letter accused him of ruining the United States and called on him to “give up” his re-election bid.

“I made a ‘Special Gift’ for you to make a decision,” the letter read, referring to the powder. “If it doesn’t work, I’ll find a better recipe for another poison or I might use my gun when I’ll be able to come. Enjoy!” It was signed “FREE REBEL SPIRIT.”

Fonda Kubiak, the public defender assigned to Ferrier, requested a preliminary hearing and a hearing to determine whether Ferrier is in fact the defendant named in the complaint.

The judge informed Ferrier she was not required to enter a plea at this stage of the proceedings, “but nevertheless I will enter a plea of not guilty on your behalf.” Her next appearance is scheduled for Monday.

“She has a presumption of innocence and that’ll be pursued further after today,” Kubiak said outside the courthouse.

The FBI says six additional letters were sent to Texas containing language and substances similar to what was in the envelope intended for Trump. They were mailed to authorities and facilities allegedly connected to Ferrier’s detention in Texas in 2019.

Ferrier, 53, was arrested Sunday while attempting to enter the United States at the Peace Bridge border crossing in Buffalo. The FBI alleges Ferrier identified herself to Customs and Border Protection officials as being wanted in connection with the ricin letters and was found to have a loaded handgun and a knife on her.

On Monday, the RCMP’s Chemical, Biological, Radiological, Nuclear, Explosives team searched an apartment tied to the suspect in the Montreal suburb of Longueuil.

A software developer by trade and a native of France, Ferrier became a Canadian citizen in February 2015 according to her Facebook page.

She spent time in jail in Mission, Texas, in March 2019 on one count of tampering with government records and two counts of unlawful possession of a weapon.

Police in Mission arrested Ferrier after finding her in a park after hours in her RV. According to her court-appointed lawyer, Alberto Osorio, she initially refused to identify herself.

Police then conducted a search and found a fake Texas driver’s license and two guns, according to police and the prosecutor.

District attorney Ricardo Rodriguez Jr. said his office didn’t formally charge her with unlawfully carrying a weapon because it didn’t think it would be possible to secure a conviction. The charge of tampering with government records was dismissed in May 2019, in part because Ferrier was facing deportation from Immigration and Customs Enforcement, Rodriguez said.

He said there was no sign Ferrier posed a danger at the time. She co-operated with police when she was arrested and there was nothing suspicious about the fact that she had guns, he said, adding that the guns were not pointed at police during the arrest.

“I wish we had a crystal ball to be able to know what’s going to happen,” he said.

On Monday, Sheriff Eddie Guerra in Hidalgo County, in southern Texas, confirmed that letters “containing the deadly toxin ricin” had been mailed to him and three of his detention staff.