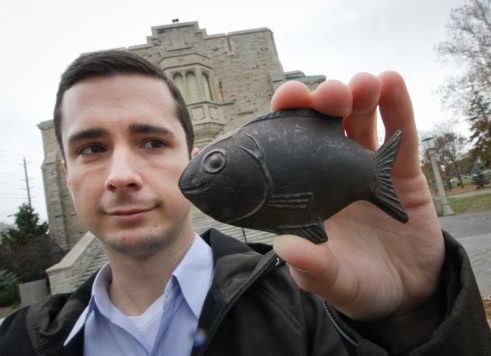 By Michelle McQuigge, The Canadian Press

Toronto: Who says fish has to be edible to be a source of iron? Not researchers from the University of Guelph.

They say they’ve developed a way to help address iron deficiency in developing countries using a piece of the metal shaped like a sea creature.

Researchers say placing the fish-shaped block of iron into a cooking pot, adding something acidic like citrus juice and boiling it for 10 minutes greatly increases the iron content of the cooking liquid.

Cooks can then remove the fish and continue with their usual preparations secure in the knowledge that they’ve added the equivalent of a chicken breast’s worth of iron to their meal.

Researchers say subjects of the study in Cambodia were three times more likely to use the iron fish than to take iron supplements to address their nutritional shortfall.

They also found that Cambodian women who used the fish consistently for 12 months were no longer anaemic when the year was up.

The research, originated by University of Guelph PhD graduate Chris Charles, has now been parlayed into a business venture by another of the school’s doctoral candidates.

Gavin Armstrong, who is building upon Charles’s research as he pursues a PhD in biomedical science, has begun selling the reusable iron fish to aid organizations and individual consumers.

In his role as chief executive of Lucky Iron Fish, Armstrong said he hopes to have an impact on a pressing, worldwide public health concern.

“Iron deficiency is the world’s most common micronutrient issue,” Armstrong said in a telephone interview from Guelph, Ont. “Current treatments are not working. It’s costing us billions of dollars, and yet it’s getting worse.”

The World Health Organization describes iron deficiency as “a public health condition of epidemic proportions.” It says that more than two billion people worldwide are known to be anaemic, a condition often caused by dietary iron deficiency.

Armstrong said the iron fish, which is 7.6 centimetres long and weighs about 200g, was inspired by cast iron cookware. The pots are known to leach levels of iron into the food prepared in them, but they’re also expensive and impractical for people in Third World countries.

Adding iron blocks to cooking liquid seemed to reproduce the effects of cooking in cast iron, but Armstrong said respondents in Cambodia balked at that idea.

Only when researchers adapted the science to fit the local folklore did the idea take off.

“There is a symbol of luck in Cambodia with a certain type of fish that, if you have it in your household, it will bring your household luck and prosperity,” he said. “When people started getting healthier, they said: ‘Oh, it’s the luck of the fish. It works.”’

Armstrong said the latest data found 92 per cent of the 330 Cambodian women taking part in the study were still using the fish after one year compared to 33 per cent who were consistently taking oral supplements.

The current iron fish can safely be used once a day for five years, he said. When the smiley face painted on the front has faded, consumers know it’s time to replace it.

The iron fish and accompanying training materials are largely marketed towards aid organizations, but Armstrong said he hopes westerners adopting a low-iron lifestyle such as veganism may also find a use for the product.

Individuals willing to pay the $25 price tag for a single fish are also paying for the company to donate one to a Cambodian family, he said.