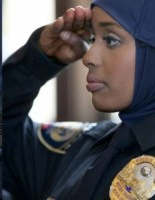 Ottawa: The National Council of Canadian Muslims (NCCM), a prominent civil liberties & advocacy organization, welcomes the decision by the Royal Canadian Mounted Police (RCMP) to allow members of the force to wear the Islamic headscarf, commonly known as hijab.

Three types of headscarves were tested before one was selected which would not encumber officers and could be removed easily if needed.

“This decision by the Mounties, as Canada’s national police service, is a welcome one and a natural evolution for Canadian policing that follows similar moves in the private sector as well as in other police services across the country,” says NCCM Communications Director Amira Elghawaby.

“While in 1990 there was initial reluctance to allow Sikh RCMP officers to wear the turban as part of their uniforms, Canadians have since embraced the change and we expect that this will be the same with the decision to allow the hijab.

“The Canadian Muslim population is growing and this decision will help reflect the richness and diversity of our country as well as open up career options for minorities.”