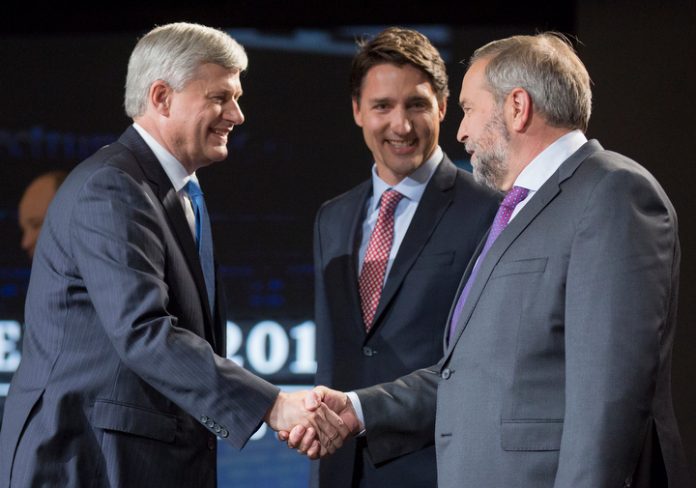 By Rob Gillies, THE ASSOCIATED PRESS

TORONTO: Canada’s Conservative prime minister acknowledged Thursday that things aren’t great in the Canadian economy, but in a debate ahead of next month’s election he asked Canadians where they would rather live.

Polls and analysts say the Oct. 19 vote is the first three-way toss-up in Canada’s history.

In a debate focused on the economy, Stephen Harper said Canada has fared better than other countries amid global insecurity. “I have come to work now for 7 years with nothing but economic crises around the world,” Harper said.

“I’ve never said things were great,” he said. “I’ve said we’re living in a very challenging environment. … Where would you rather live?”

Canada, the world’s 11th-biggest economy and the United States’ biggest trading partner, suffered far less damage from the financial crisis and Great Recession than its southern neighbour, but fell into a recession in the first six months of the year after a sharp reduction in the price of oil. Canada has the third largest oil reserves in the world.

Opposition New Democrat leader Tom Mulcair and Liberal leader Justin Trudeau attacked Harper for relying too much on the oil industry to bolster the economy.

“Mr. Harper put all his eggs into one basket and he dropped the basket,” Mulcair said.

Trudeau, the 43-year-old son of late Prime Minister Pierre Trudeau, asked Canadians if they were better off than when Harper took power in 2006 and passionately shouted down Harper and Mulcair, whose New Democrat party could form a government for the first time in the country’s history. Mulcair has moved his party to the centre and vowed to balance the budget.

Harper, campaigning for a fourth term on a record of economic growth, received good news earlier this week when the government announced the federal budget was in surplus last year after six straight years of deficits. Harper warned Canadians of permanent deficits and higher taxes if the Liberals or New Democrats win government.

Trudeau, whose party governed Canada for most of the last century, said he’ll stimulate the economy with deficit spending on infrastructure.

“This is the time to invest in the future of our country. Canadians know this. The only two people who don’t know this are the two gentlemen on this stage,” Trudeau said.

According to the CTV/Globe and Mail/Nanos Nightly Tracking Poll, the Liberals are at 30.9 per cent while the New Democrats are at 30.4 per cent and the Conservatives at 30.1 per cent. The margin of error for the survey of 1,200 respondents is 2.8 per cent.

Since coming to power, Harper has managed to pull a traditionally centre-left country to the right. He has lowered taxes and supported the oil industry, but has failed to win approval for new pipelines that would get the oil to market.

Nelson Wiseman, a University of Toronto political science professor, said Trudeau may have appealed to a lot of people by showing passion but may have also hurt himself by interrupting the two others. Wiseman said a relaxed Mulcair, running a front-runner’s campaign, looked more comfortable in his skin than he did in the first debate. He said Harper did nothing to hurt himself with his base.

Few Canadians likely watched the debate. It was hosted by the Globe and Mail newspaper and wasn’t broadcast on the major networks. It was aired on CPAC, the equivalent of PBS in the U.S.