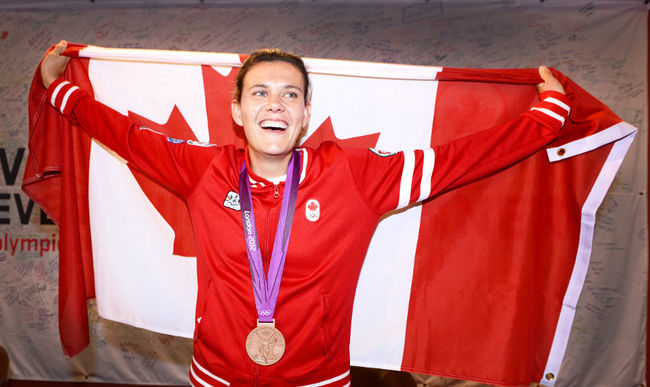 Not a lot rattles Christine Sinclair. Not even the eyes of a nation.

Sinclair is doubling as striker and as ambassador for Canada when her native country hosts the Women’s World Cup starting in June. No doubt there’s mounting pressure, but so far Sinclair isn’t letting it get to her.

“I really haven’t spent too much time thinking about the actual World Cup; everything that I’m focused on is the preparation for it,” she said. “I’m sure as the tournament gets closer and closer the hype and the excitement will build, but it’s all about preparation right now.”

The response is typical of the soft-spoken and unassuming 31-year-old, who would rather let her play on the pitch speak for her.

Sinclair is probably America’s best-known non-American women’s soccer player. She was on the University of Portland’s two NCAA championship teams and now plays for the Portland Thorns of the National Women’s Soccer League.

But in Canada she’s a celebrity _ albeit a shy one. She ranks behind only Abby Wambach among active players for international goals with 153 (Wambach has the record with 178), and needs five more to match Mia Hamm for second on the all-time list.

“I think her biggest asset, what everyone relates to, is just how humble she is. Regardless of how much stardom she could have, she just wants to play football, and keep it simple and be with her team,” Canada coach John Herdman says. “She’s not interested in going out and doing the glitzy sort-of celebrity things.”

Sinclair grew up in Burnaby, British Columbia, and from the start it seemed natural that she would wind up in Portland: uncles Bruce and Brian Grant both played for the NASL’s Portland Timbers. Her family rented a home from Clive Charles, who also played for the Timbers and later became the well-respected coach of both the men’s and women’s teams at Portland.

Her first year with the Pilots in 2001 she led all Division I freshman with 23 goals. As a sophomore she tallied 26 goals and led Portland to the NCAA national championship, scoring twice in the 2-1 double-overtime victory over Santa Clara.

Her senior year she scored NCAA record 39 goals, including a pair in a 4-0 victory over UCLA for a second national title.

Charles, who died of cancer in 2003, remains an influence.

“One thing he taught me is to respect the game. He used to say, every time I’d go out, ‘You better earn your right to play, because other players are fighting for the exact same thing that you are,”’ she said. “That’s something I’ll never forget.”

Sinclair has been a standout on the Canadian national team since 2000, when she led it with three goals in the annual Algarve Cup tournament in Portugal. She a veteran of three World Cups and two Olympics.

Canada surpassed expectations with a bronze medal at the 2012 London Games. Sinclair set a record with six goals in the tournament, including three goals in a heartbreaking 4-3 semifinal loss to eventual gold medallist United States, to win the tournament’s Golden Boot.

“What she brings on and off the pitch is very similar. She’s just a quiet achiever, a consistent performer,” said Herdman said. “She ticks all the boxes, on the physical side and the mental side every single day. She’s a high achiever and wants to consistently find ways to improve and stay at the top of the game.”

About the only time Sinclair has made a demonstrative fuss was in that semifinal match against the Americans at Old Trafford. She was fined and suspended four games by soccer’s international governing body for “displaying unsporting behaviour toward match officials.”

“We feel like we didn’t lose, we feel like it was taken from us,” Sinclair said moments after the final whistle. “It’s a shame in a game like that that was so important, the ref decided the result before it started.”

Canada’s surprising London finish _ as well as the home-field advantage _ is fueling Sinclair and her teammates going into the World Cup.

“I think that the London experience gave us a taste of winning, and you don’t want to let that go,” she said.

Canada is ranked No. 8 in the world as the World Cup looms. The home team is in Group A, along with China, New Zealand and the Netherlands, and will open the tournament against China in Edmonton, Alberta on June 6. The final is set for July 5 in Vancouver, Columbia.

Sinclair will have a starring role, and she’s OK with that. Canada Post recently unveiled a postage stamp commemorating the event that includes Sinclair and teammate Kadeisha Buchanan.

“It’s a once-in-a-lifetime opportunity for myself and my teammates. We had a goal heading into London, obviously to medal but also to change the sport of soccer in Canada. This is only going to continue that, and that’s still our goal,” she said. “My dream is that young kids, coming to watch this World Cup, will be inspired.”