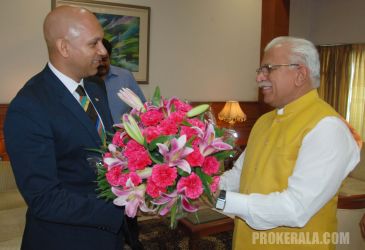 Chandigarh, June 24 (IANS) Canada has shown interest in setting up Haryana’s first horticulture university and to explore possibilities of a joint venture with the state to develop smart cities, an official said on Wednesday.

According to him, Canadian province Ontario’s Premier Kathleen Wynne will lead a business delegation to Haryana on February 2-3.

“I look forward to join hands with Canada for development of Haryana through all possible partnerships between governments, companies and educational institutions,” the chief minister was quoted as saying in an official statement.

“We are particularly looking for specialisation in skill development of our youth so that they become more employable,” he said.

The chief minister said the state was also aiming to tap solar power. “We have set a target to generate 4,000 MW of solar energy from private units, including rooftop plates.”

High Commissioner Patel said Canada was starting non-stop flights between Toronto and New Delhi from November 3, which will help to further boost mutual cooperation between Canada and India.