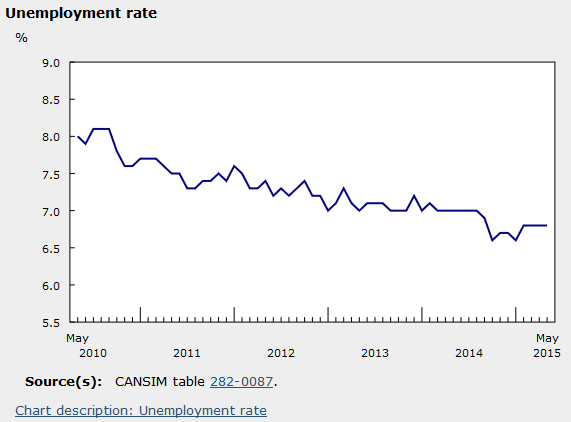 OTTAWA: The hobbled economy received an encouraging jolt last month from a surging labour market, one that bolstered workplaces considered key to the country’s rebound: factories.

The job-growth figures, released Friday by Statistics Canada, provided a cautious dose of optimism that the economy’s trudging forward again after its outright reversal in the first three months of 2015.

The survey, which found a net gain of 58,900 jobs in May, offered the latest clue about the economy’s performance in the second quarter. The report also showed the national unemployment rate remained locked at 6.8 per cent for the fourth-straight month.

Last week, Statistics Canada released real gross domestic product figures that showed the economy shrank at an annualized rate of 0.6 per cent in the first quarter of 2015.

The dismal result, blamed in large part on the oil-price collapse, poor winter weather and a temporary slowdown in the United States, led to a wave of downgraded economic projections on how the rest of the year will play out.

On Friday, experts were quick to highlight the promising ingredients baked into the fresh batch of labour data _ all while warning about reading too much into one package of the notoriously volatile monthly job figures.

Even so, Scott Smith, a senior market analyst at Cambridge Global Payments, said jobs data in recent months do suggest brighter days ahead.

“When you smooth out the numbers and look at the longer-term picture, it’s hard to argue that we’re not seeing robust gains in the labour market in Canada,” Smith said.

He also noted there are signs the long-expected “rebalancing” of job and economic growth from the oilpatch to Central Canada appears to be underway.

A closer look at the data shows manufacturing gained 21,500 positions in May, rising for the second consecutive month. The category of health care and social assistance also saw a considerable increase in work, adding 20,700 positions.

The natural-resources industry, hit hard by the decline in energy prices, shed 2,400 jobs, the report said.

By province, Ontario received the biggest employment boost by adding 43,900 jobs last month, 15,700 of them in manufacturing. The flood of new positions shaved 0.3 percentage points off Ontario’s jobless rate, which slid to 6.5 per cent.

In British Columbia, the economy gained 30,600 positions, with 2,600 of the gigs in manufacturing.

“We’re definitely seeing what I’d call green shoots in terms of a rotation away from a heavy reliance on the energy sector to the manufacturing sector,” Smith said.

Arlene Kish, senior economist for IHS Global Insight, said while the manufacturing number was encouraging, employment in the sector still needs to show more improvement before it can be considered a sharp turnaround.

It’s only up by one per cent compared to a year ago, Statistics Canada said.

“The recent number was good, but we can’t get too euphoric,” said Kish, who is optimistic about the second quarter. “It’s looking pretty good. You know, anything’s better than a negative print at this point.”

The overall increase in jobs last month more than offset April’s loss of 19,700 positions. Of May’s gains, 56,800 positions came in the private sector, considered a healthier sign for the economy.

Compared to May 2014, employment was up countrywide by 192,300 net jobs, including a gain of 233,000 full-time positions. Statistics Canada noted there have been employment gains of about 20,500 positions per month since the start of 2015.

“I think we are seeing this rebound that we’ve been anticipating,” said Dawn Desjardins, assistant chief economist at RBC. “We certainly had been concerned about a weak pace of job creation against the backdrop where the economy is actually contracting.”

Desjardins noted how the data shows that even Alberta _ hit hardest of any province by the oil slump _ still had 38,400 more people working last month compared to May 2014, amounting to an increase of 1.7 per cent.

She said the country’s recovery from the oil-price plunge appears to be following the Bank of Canada’s script, which leads her believe governor Stephen Poloz will likely hold off on moving the trend-setting interest rate next month.