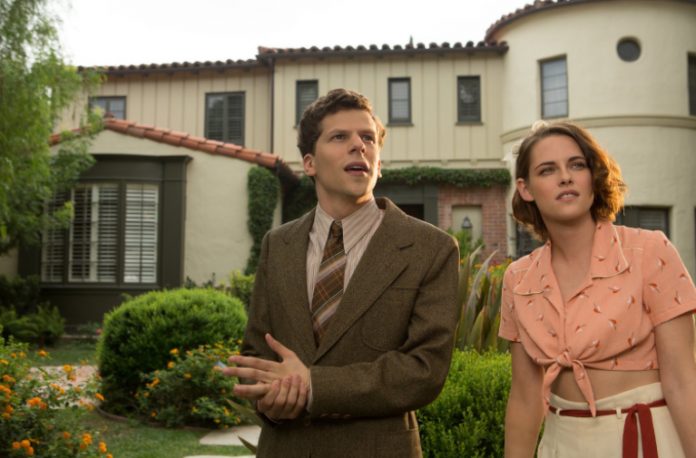 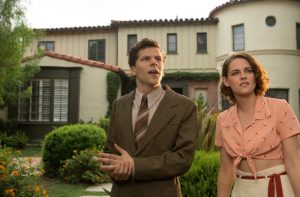 Woody Allen has been around for a long time. Consider his latest, Cafe Society, to be one of his very best. Get ready for nostalgia and laughs from Allen as a few star-crossed lovers head on a collision course. Laugh up this Mongrel Media delight at The Fifth Avenue Cinemas and International Village,

Admirers of all things Hollywood will get their thrill of Tinseltown here. Set in the glory days of the big studios when moguls and glamour ruled the roost unlike today with the corporate set, our tale revolves around a mild mannered New Yorker who sets tracks for LA.

Credible casting sees a 1930s looking Jesse Eisenberg move west in hopes of landing a job. Lucky (or not so lucky) for him is that a rich uncle is a power broker in hollywood cut from the Michael Ovitz tradition. Give it up to comedian Steve Carell to pull no punches as the deal making Dynamo who reluctantly takes on the kid. Comic and romantic chaos ensue,

Clearly Eisenberg is playing a younger Woody Allen and hits a home run when a girl or two get in the way. Livening things up considerably are Kirsten Stewart and Blake Lively as women trying to get ahead. Also that New York Jewish dynamic is played for laughs and is an absolute hoot.

Allen not only directed but wrote this whimsical farce. Simultaneously it is funny with a bit of melancholy thrown in. Harmless well-acted fun Cafe Society is one film definitely worth lining up for.