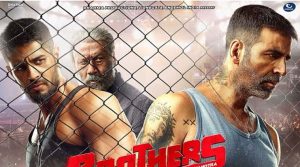 Bollywood has made 121 Hollywood remakes over certain time and while some have been official, most of them have lifted scene by scene and needless to say that while some were taken to court, most of them have escaped the detection and the list is a long one. Sarkar/Godfather, Partner/Hutch, We Are Family/Step Mom, Black/The Miracle Worker, Omkara/Othello, Agneepath/Scar Face, Daraar/Sleeping With The Enemy, Baazigar/A Kiss Before Dying, Ghajni/Memento, Tezaab/Streets Of Fire are just some of the prime examples and while some made huge impression at the box-office, the others were complete duds but inspite of that, Bollywood keeps churning Hollywood remakes and the latest is Dharma Productions & Karan Malhotra directed Brothers, which is the official remake of Hollywood’s super hit film Warriors . Starring Akshay Kumar, Siddharth Malhotra, Jacqueline Fernandez, Jackie Shroff & Shefali Shah, the movie has been in news for quite some time and since it’s the official remake, Karan Malhotra & Karan Johar have made sure that it turns out to be better than original and it seems the critics and the entire star cast have given their thumbs up after the recent trial and if the film turns out to be a hit then surely, official or unofficial, we’ll seeing many more attempts of Hollywood remakes by Bollywood in the near future !!!

Kabir Khan’s Bajrangi Bhaijaan may have scrapped through the Pakistani censors (after a few minor cuts) but his latest wasn’t as lucky as after a rant by Jamait-e-Islami’s Hafiz Sayed, it was announced that Phantom has been banned in Pakistan.Saif Ali Khan is obviously upset as his earlier home production Agent Vinod was also banned in Pakistan and so is Katrina Kaif, the heroine of the film, whose last film Ek Tha Tiger was also banned but guess what, this is the third film of Kabir Khan to get an axe in Pakistan after Kabul Express & Ek Tha Tiger and he’s visibly shaken and upset as his latest film Bajrangi Bhaijaan is a huge hit in Pakistan and in fact the film has shattered many box-office records. Phantom, which was shot in Vancouver and many other prominent cities in the Middle East & Europe, is slated to release soon and it’s to be seen if Kabir Khan’s directorial magic would bring any changes to the fortunes of slumping Saif Ali Khan, who was seen promoting the film at the sets of Jhalak Dikhla Jaa with Shahid Kapoor, his wife’s ex-love flame!!!

Amitabh Bachchan is Maharashtra’s Brand Ambassador for ‘ Save The Tiger’ campaign!!! 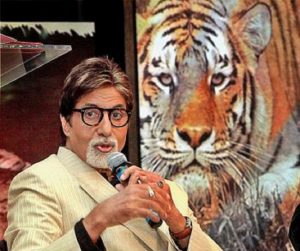 Gujarat’s tourism brand ambassador and the voice of many other campaigns in India, Amitabh Bachchan has been declared as the brand ambassador of Maharashtra’s Save The Tiger campaign and it was announced by Maharashtra’s forest minister at a packed news conference. Though the tiger population has been steadily increasing in Maharashtra for some time, the authorities hope to see a jump by roping in Amitabh Bachchan as the brand ambassador and looking at Mr. Bachchan’s past credentials; we certainly hope that the number of tigers will surely see a huge jump from the 192 reported in the last census! Director Raj Kumar Hirani of Munna Bhai films, 3 Idiots & PK fame, is recovering at home after undergoing surgery at a local hospital for broken leg which he sustained after a bike accident. Bangistan, Hum Sab Ullu Hain &  Muzaffar Ali’s Jaanisaar bombed miserably last week but all eyes are on Karan Malhotra & Karan Johar’s Brothers and Vinay Mehta & Konkona Sen Sharma’s Gour Hari Dastaan-The

Freedom File this week while Drishyam, Bahubali & Bajrangi Bhaijaan are still going strong. Lot of activities are planned this weekend to celebrate the 69th Independence Day of India & Pakistan and while Vedic Hindu Temple will see huge crowds for India’s Independence Day with lots of activities, the Pakistani community will throng the Holland Park, Surrey as Pakistan’s pop idol Shehzad Roy will be the star performer at Pakistan Festival 2015 on Sunday, August 16th from 12-8 PM. With that it’s time to offer the best wishes to Indian & Pakistani community on the 68th Independence Day of India & Pakistan and don’t forget to watch this week’s Yaadein with Nitin Mukesh, who certainly won the hearts of all at the packed Bell Centre, Surrey last week, reminiscing his musical memories on Sunday, August 16th at 1 PM on SMC#116.

Nitin Mukesh steals the hearts of all at packed Bell Centre!!!
Nitin Mukesh had been saying it in his recorded messages & interviews and after a marathon 5 hour performance at Surrey’s Bell Centre on Sunday, August 9th, it’s safe to say that he stole the hearts & souls of Vancouver’s music loving audiences and  ‘Remembering MUKESH with NITIN MUKESH ‘ will remain etched in their memories for a very long time. Nitin, Manasi and the musicians performed brilliantly and many have termed the concert as the finest of their life. Nitin made people cry, laugh, sing and dance to the evergreen melodies of his illustrious father MUKESH JI and the standing ovation at the end is a proof of his magical charm with Vancouver’s audience, who continue to throng his performances and remained glued to their seats for over 5 hours. NANAK’s Angoori Gulabjamun were served throughout the performance and the evening was a bit more melodious when Kamal Sharma of KVP Entertainers & Kamal’s Video Palace announced $ 1 from the sale of every ticket going to St. Paul’s Hospital. It certainly was an evening to REMEMBER!

5 secrets to a flat stomach