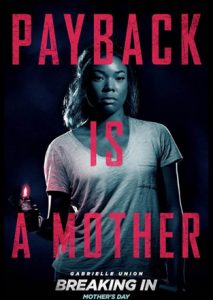 Mother knows best. No matter what the species mothers have that basic instinct to protect their young. Perfect timing for Mother’s Day sees Universal Studios bring out a nifty new thriller rather appropriately called Breaking In. Just how far would you go to save your kids? See one determined mom do the right thing when she’s pushed to the limit. Break in to any Cineplex Cinema in British Columbia to see one person do the right thing.

One against four doesn’t seem like good odds. Unfortunate things happen to good people. See how one normal family headed by a gutsy mom must use all their wits and then some to allude some petty criminals – in their own home. Parents everywhere ought to look up to Shaun Russell. Busy trying to wind up an estate, manage two young kids and tend to a “gifted” old house is Gabrielle Union.

Family matters take time to sort out. What was supposed to be a simple countryside ride to picturesque Wisconsin in hopes of inspecting and cleaning up an heirloom home turns out to be anything but. Watch a simple home invasion gone astray with two innocent children trapped inside with apparently no hope of escape. Left at the mercy of a merry band of merciless thugs the bad guys make one small miscalculation – a mad as hell mom on the outside seething at the prospect of having her children in jeopardy. Like the old saying hell hath no fury like a woman. It doesn’t take long for Mrs. Russell to go postal in this highly charged thriller.

Enough suspense and heroics sees one feisty heroine do whatever it takes to get her kids back. Go with the flow and see how sweet revenge or much better described freedom can be.