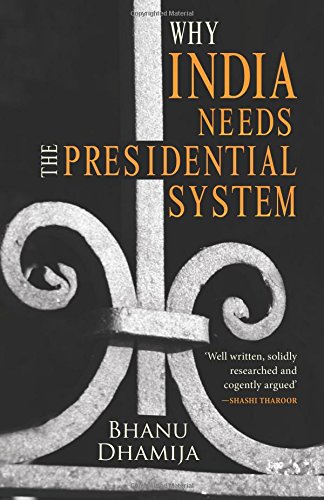 Was “familiarity” the only reason why India adopted a parliamentary system of governance? In his book “Why India Needs the Presidential System”, author Bhanu Dhamija, himself a publisher, seeks to answer this question, while extending some radical thoughts on how we should be governed.

“The Indian system began to break down almost immediately after Independence, because the powers of its two topmost officials were poorly defined,” says Dhamija, 56, a non-resident Himachali, while calling for a federal set upnstead, given India’s diversity, size and communal divisions.

“The truth is the Indians adopted the British parliamentary system for poor and unsubstantiated reasons. Vallabbhai Patel, the first leader to attempt a justification of this system in India’s Constituent Assembly, could come up with only one reason: Familiarity.”

Dhamija, who is an alumunus of Punjab University in Chandigarh and the Stern School of Business, New York University, and has lived half his life in the US, says that the centralised, unitary control that the parliamentary system offers does not work for India.

According to him, the architect of the Constitution of India Bhimrao Ramji Ambedkar alluded to two main benefits of the parliamentary system in the Constituent Assembly — one that it had the potential for a “more responsible” governments and the other of a “strong centre”.

He seeks to suggest how the benefits were not just unrealistic, but also impracticable. He also goes on to state that Jawaharlal Nehru, the first prime minister, almost single-handedly picked this system of government, but never really bothered to explain his choice in the assembly.

While Ambedkar, he says, was the chief defender of the parliamentary system, he came on the scene only after the decision to adopt this system hasd already been taken. Prior to his appointment as chairman of the Drafting Committee, he had always opposed this system.

“Ambedkar would become the first framer to disown this system. During a debate in the Rajya Sabha in 1953 he said: ‘My friends tell me I have made the Constitution. But I am quite prepared to say that I shall be the first person to burn it out. I do not want it. It does not suit anybody.'”

Even Vallabhbhai Patel, the first home minister and deputy prime minister of India, and Muhammad Ali Jinnah, the father of Pakistan, also recommended a different system of governance, even as Mahatma Gandhi favoured a system based on village panchayats.

“How the concentration of power in a Central government created a ‘strong’ government? What made a national government ‘strong’ in a large diverse nation, a union based on willing participation of units, or one based on force?” he queries.

“As India’s constitution was being adopted, it was quite evident that it had failed to inspire.”