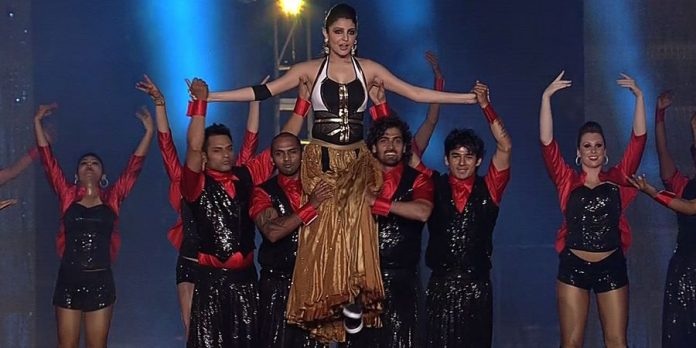 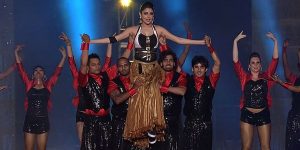 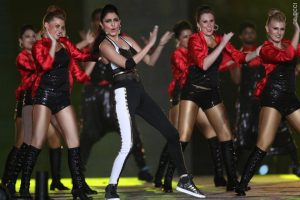 It was billed as the greatest show at Kolkata’s Salt Lake Stadium, however, the opening ceremony of IPL 8 proved nothing more than a damp squib as the rain Gods delayed the start for more than 90 minutes and then the highly promoted Bollywood lineup failed to live up to the expectations. SAIF ALI KHAN continued his bad form at the IPL stage as well as he forgot lines and had problems identifying cricketers and certainly was a misfit on world’s most glamorous cricket stage. Popular music director PRITAM may have been a hit at Hindi films but his rendition of Ravindra Sangeet was booed by the audiences. Shahid Kapoor made a disastrous grand entry as he crashed his bike and broke the stage and recovered only after stumbling. ANUSHKA SHARMA was greeted with a huge applause and even VIRAT KOHLI was seen smiling from the VIP box, however, her performance was nothing but routine and quite ordinary. FARHAN AKHTAR tried to carry his ROCK ON performance but failed miserably as many rated it the worst performance of his career and certainly the worst of the IPL opening night. HRITHIK ROSHAN tried to bring some respectability but it was too late and too little and to be honest, even Hrithik have had much better days. All in all, bollywood failed miserably at the opening ceremony but the Kolkatan’s had something to celebrate as the home team KOLKATA KNIGHTRIDERS beat MUMBAI INDIANS by 3 wickets to salvage some pride for the locals!!!

Amitabh Bachchan gets the Padma Vibhushan!!! 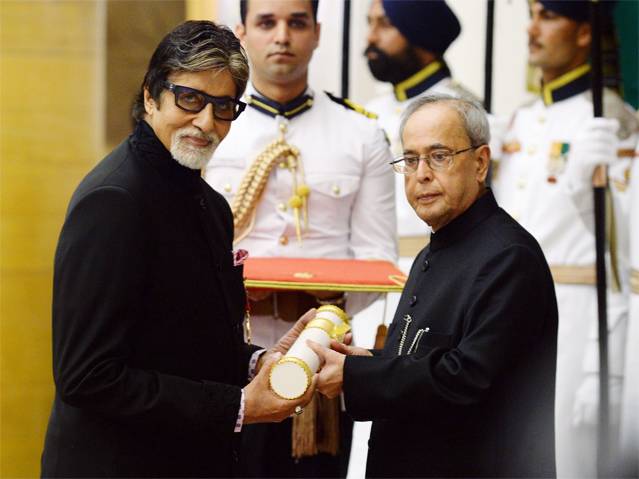 The entire BACHCHAN FAMILY was at the President’s house to applaud as AMITABH BACHCHAN got his third PADMA award and India’s President awarded him with PADMA VIBHUSHAN, India’s second highest civilan award. H. H. AGA KHAN, the spiritual leader of the Ismaili Community, music director RAVINDRA JAIN, Classical Vocalist TRIPTA & director BARUA were some of the other prominent winners, however, DILIP KUMAR couldn’t make it due to poor health. ASIAN JOURNAL congratulates all the winners!

Hollywood pips Bollywood at the Box-Office!!!

It wasn’t the first time but the huge margin surprised many as Hollywood’s release of FAST & FURIOUS 7 collected over Rs. 70 Crores to Bollywood’s highly fancied DETECTIVE BYOMKESH BAKSHI which collected a meagre Rs. 14.5 Crores. Dibakar Bannerji’s DETECTIVE BYOMKESH BAKSHI with Sushant Singh Rajput carried good reports and under YASH RAJ FILMS label, was expected to sweep the box-office, however, it crawled at the box-office and it seems the Indians preferred to see the high energy FAST & FURIOUS 7 in comparison to slow moving Detective Byomkesh Bakshi. The world media hailed the Indian Sherlock Holmes but the Indians failed to digest the period movie and it’s to be seen if the business picks up otherwise we may never see the sequel coming up soon !!! 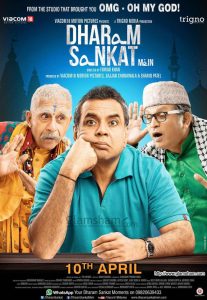 Bollywood hasn’t smiled all this year and except BABY, almost all touted films have fallen flat at the box-office and the trend continued as the much hyped DETECTIVE BYOMKESH BAKSHI struggled against the popular sequel of FAST & FURIOUS. Kolkata never looked so glamorous and mysterious and yet, Dibakar Bannerjee failed to evoke the right response and like many this year, DBB has been declared a flop, however, three new films are opening this week and hopefully they’ll reverse the trend. Sunny Leone’s EK PAHELI LEELA, which has some foot tapping numbers, opens this week with DHARM SANKAT MEIN featuring Paresh Rawal, Naseeruddin Shah & Anu Kapoor and Vinod Chopra’s acclaimed international film BROKEN HORSES but it’s to be seen if the IPL 8 will put a dent to all high hopes! It’s confirmed that SHAHID KAPOOR is marrying Delhi’s MIRA RAJPUT and the date could be JUNE 8th! the music of Punjabi film NANAK SHAH FAKEER, which is supposed to release on April 17, was released by Pandit Jasraj & music director A.R.Rehman ; this week’s YAADEIN features the Punjabi hits of SHAMSHAD BEGUM on Sunday, April 12th@ 1 PM on SMC#116 and with that, it’s time to say good bye but not before wishing you all A VERY HAPPY VAISAKHI!

Working toward a paperless office