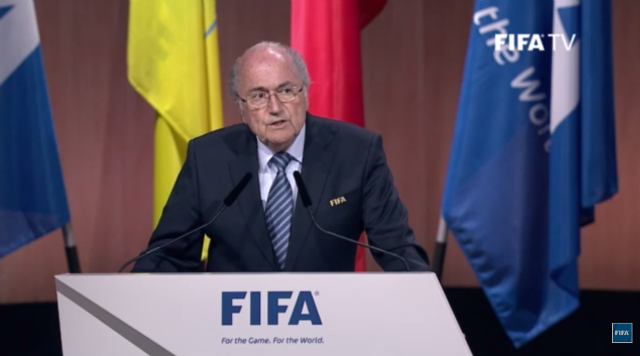 Zurich, May 29 (IANS) In spite of widespread criticism and calls asking him to step down after the recent scandal that rocked the football world, FIFA president Sepp Blatter was re-elected for the fifth consecutive term after his lone rival Prince Ali bin al-Hussein of Jordan withdrew after the first round of voting at the end of the Congress here on Friday.

The 79-year-old Blatter, who has been FIFA president since 1998, got 133 votes to Prince Ali’s 73 as three member associations’ votes were deemed invalid in the 209 member federation. Swiss Blatter needed a two-thirds majority in the first round of voting but fell short by seven votes.

The voting was about to enter the second round where Blatter needed only a simple majority i.e. 105 votes to get re-elected when the 39-year-old Jordanian chose to withdraw, handing the incumbent president his fifth consecutive victory.

The elections took place following a big scandal in which seven top FIFA officials were arrested here on Wednesday morning as part of a US prosecution that indicted nine football officials and five corporate executives. Blatter faced calls to resign, including from British Prime Minister David Cameron, who said in Berlin on Thursday that Blatter should quit “the sooner the better”.

The vote came two days after FIFA vice-presidents Uruguayan Eugenio Figueredo and Caymanian Jeffrey Webb, who is also president of the Confederation of North, Central American and Caribbean association football (CONCACAF), as well as the former president of the South American Football Confederation (CONMEBOL), Paraguayan Nicolas Leoz were held in the US fraud inquiry.

In explaining why the US Justice Department was prosecuting leaders of FIFA, Attorney General Loretta Lynch had said the defendants and their co-conspirators partially planned their scheme in the US, used the US banking system to pay bribes and “planned to profit from their scheme in large part through promotional efforts directed at the growing US market for football”.

Swiss prosecutors have also launched a separate investigation into the bidding process for the World Cup tournaments in 2018 in Russia and 2022 in Qatar.

Many of FIFA’s major sponsors, including Coca-Cola, Visa, Adidas, McDonald’s, Hyundai Motor and Budweiser, have expressed concern over the investigations.