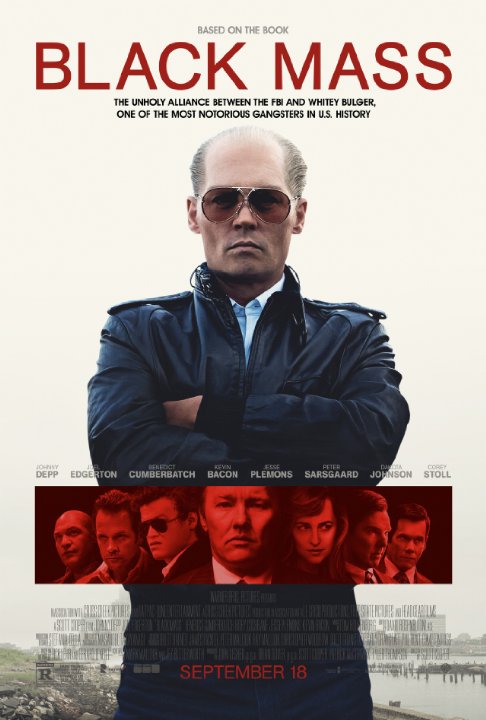 Crimes waves are common in most cities – big or small. Black Mass is a high voltage drama, based on a true story of a low two-bit hood that makes to the bit time – with a little help from his friends. Check out this hard to look away from Warner Brothers  release now stalking audiences at Cineplex Odeon Theatres around B.C.  Bank on it.
Man of the moment James (Whitey) Bolger is not a man you want to play games with. Brought to life by Johnny Depp this is one mother you just don’t want to reckon with, let alone anger. Tell that to the countless clowns who went up against Boston’s #1 gang in the 1970s -1980s.  With a brother in the Senate there is no denying the power of James Bolger and that base seems unstoppable.
Sometimes you need a big fish to go after a bigger fish. So when a hot shot F.B.I, agent thinks it would be a good idea to “turn” this thug into an informer it sets off a chain of events threatening to turn Boston into a ghost town. Let the games begin. And get the graves ready,
Full of style, realistic violence and a superb recreated atmosphere Black Mass rocks. Impressive as hell is Depp who could easily get an Oscar nod. Equally brilliant as an American politician is Benedict Cumberbatch. Smart, reliable, at times touching and always entertaining Black Mass should get a critical mass of both critic and public reviews.