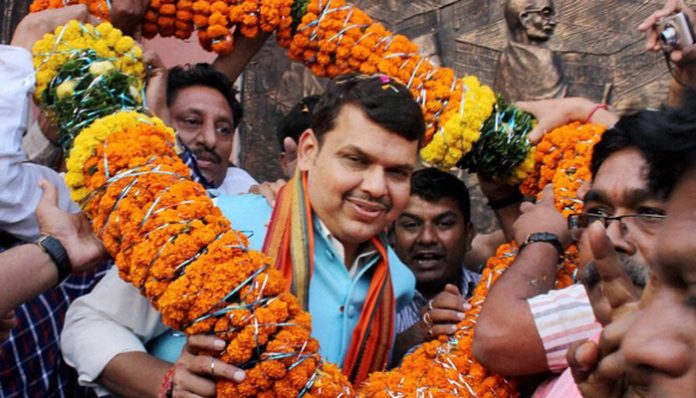 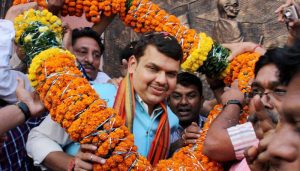 Mumbai: The 13-day-old BJP government of Chief Minister Devendra Fadnavis Wednesday won a confidence vote in the Maharashtra assembly amid bedlam that left Governor C.V. Rao slightly injured and the Shiv Sena and the Congress up in arms.

The moment Speaker Haribhau Bagde declared that a one-line motion by BJP’s Ashish Shelar seeking the confidence of the house in the government had been passed by a voice vote, all hell broke loose.

The ruling led to unprecedented chaos inside and outside the assembly, with the speaker suspending five Congress legislators for two years after accusing them of pushing and injuring Governor Rao.

Official sources said the governor sustained minor scratches on his left hand when some legislators jostled for his attention and got close to him as he alighted from his vehicle in the afternoon.

Shortly after the vote of confidence, the speaker declared Shiv Sena’s Eknath Shinde the Leader of Opposition, ending weeks of speculation on the Sena’s stance vis-a-vis the government.

In no time, Shinde hit out at the government.

“The house must be run according to rules. The new government has strangled democracy. We wanted a division (of votes) but the trust vote has been passed by a voice vote,” he said.

The Congress called the speaker’s ruling “a murder of democracy”. The Sena said it was “a black day” for Maharashtra.

The BJP has 121 MLAs and has the support of an ally and nine independents as well as some smaller parties besides the ‘unconditional external support’ of the Nationalist Congress Party (NCP) with 41 MLAs.

Sena and Congress legislators, including former chief minster Prithviraj Chavan, trooped out of the house and squatted on the stairs, raising slogans against the government and demanding that the government prove its majority.

Around 4 p.m., when the governor reached the assembly to address a joint session, the agitating legislators blocked his vehicle and surrounded him for nearly 15 minutes before security personnel whisked him away. By then, he had suffered the injury.

Shiv Sena members shouted “Dadagiri nahi chalegi!”, “Down with the minority government!” and “Governor go back!” as Rao addressed the house. They boycotted the proceedings.

Later, Revenue Minister Eknath Khadse accused 12 Congress legislators of pushing the governor and demanded that they apologise or be suspended from the house.

The speaker met leaders of the Congress and Shiv Sena. Congress house leader Radhakrishna Vikhe-Patil tendered an apology, saying whatever happened was not intentional.

The speaker appointed a panel to probe the incident and suspended five Congress legislators for two years, rejecting appeals by Sena’s Shinde and NCP’s Chhagan Bhujbal to desist from the action.

Denying that they jostled with the governor, one of the suspended MLAs, Abdul Sattar, said the action against them was rooted in their demand questioning the manner in which the Fadnavis government claimed it had won the confidence vote.

“Everybody saw what happened. We wanted a meeting with the governor which was not given. We were protesting in a democratic manner outside as we were not allowed our say inside the assembly. We have not demeaned the governor’s office. We shall campaign against this minority government all over the state,” said Sattar.

Added another legislator: “The (Atal Bihari) Vajpayee government fell because of just one vote. Here, this government fell short of at least 25 votes and has no right to continue.”

A Sena senior accused Fadnavis of manipulating the trust vote.

Defending his ruling, Speaker Bagde said the demand for a vote came after the voice vote was passed.

“It should have been made when I asked for those who were against the motion to say no. The entire process was done as per rules.”