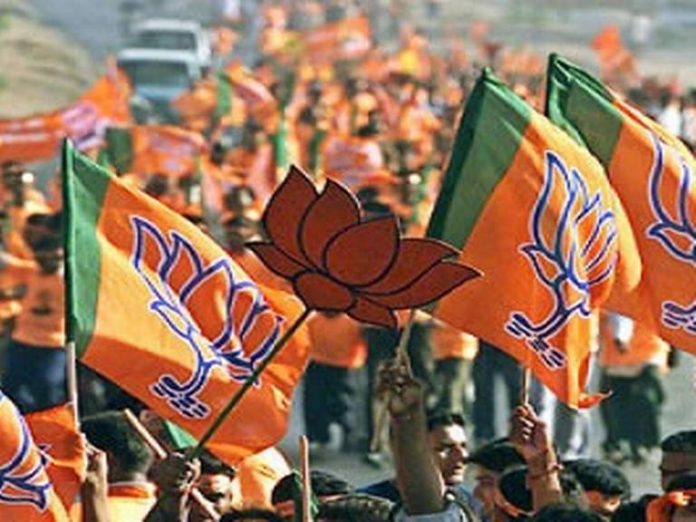 Mumbai: The Bharatiya Janata Party and Shiv Sena on Thursday finished neck-to-neck and were engaged in a tussle on Thursday to control India’s richest and biggest civic body, the BrihanMumbai Municipal Corporation.

While the Shiv Sena emerged on the top with 84 seats, the BJP was a close second at 82, and claiming the support of at least four independents, announced it would stake claim to the key post of Mayor.

The Congress, expecting to fare much better, came a poor third with 31 seats.

Any party or combine requires 114 corporators for a simple majority in the 227-member BMC house.

“The BJP core committee will meet and take a decision. We shall respect the verdict of the people,” Chief Minister Devendra Fadnavis said Thursday evening. He thanked the electorate, saying they have “reposed complete in Prime Minister Narendra Modi’s policies of development for all”.

While Shiv Sena activists started early celebrations as it appeared set to retain control of the BMC, but by late evening, the BJP surpassed all expectations and became an equal contender for the post of Mayor.

BJP Mumbai President Ashish Shelar said the party was in a position to claim the mayor’s post.

But Sena President Uddhav Thackeray did not agree and said that “the Mayor will be from Shiv Sena”, which emerged the single largest party.

Adopting a shrill anti-BJP stance, an aggressive Shiv Sena had snapped ties with the BJP ahead of the municipal elections with Thackeray anticipating at least 100 seats, if not an outright majority.

The Congress trailed at a distant third in Mumbai, forcing its city unit chief Sanjay Nirupam to accept moral responsibility. He told IANS that he has submitted his resignation to the party high command this afternoon.

Across Maharashtra, the Bharatiya Janata Party made major gains by bagging eight of the other nine municipalities.

However, Thane blocked the BJP bulldozer where the Shiv Sena bagged 67 out of 131 seats, followed by NCP with 34, BJP 23 and Congress three and AIMIM two seats.

In Ulhasnagar, the BJP grabbed 32 seats and Shiv Sena 25 of the total 78 seats. The NCP got four, Congress got one and independents and others grabbed 16 seats.

The BJP raced towards victory in the Pune Municipal Corporation with 98 seats, while the NCP got 38, Shiv Sena 10, Congress nine and MNS two, and AIMIM one in the state’s cultural and IT capital.

The contest was close in Pimpri-Chinchwad Municipal Corporation near Pune, but later the BJP zoomed ahead with 77 seats in the 128-member house, humbling the ruling NCP, which only secured 36 seats. The Shiv Sena got nine, the MNS got one and others got the rest.

In Solapur Municipal Corporation, a Congress bastion, the BJP captured 49 out of 102 seats, followed by Shiv Sena in 21, the Congress in 14, the AIMIM scoring nine, the NCP and the BSP scoring four each, while the Communist Party of India bagged one seat.

Nagpur went the BJP way with the party bagging 108 of the civic body’s 151 seats. The Congress got 29, Mayawati’s Bahujan Samaj Party got 10 seats, Shiv Sena managed two and the NCP bagged one seat.

In Nashik, the BJP appeared on way to controlling the civic body, winning 66 seats out of 112 seats. The Shiv Sena got 35 seats, while the ruling Maharashtra Navnirman Sena was relegated to just five seats. The Congress and NCP fared better than MNS with six each seats respectively.

The BJP captured Amravati with 45 out of 87 seats, followed by the Congress with 15 seats, AIMIM 10, Shiv Sena seven, BSP five, and five going to other parties/independents.

Ditto was the position in Akola where BJP scored 48 out of 80 seats with Congress trailing at 13. The Shiv Sena bagged eight, the NCP got five and AIMIM got one seat, while others got five seats.

The BJP also scored handsomely in Congress, NCP and Shiv Sena strongholds in other 11 Zilla Parishads and 118 Panchayat Samitis across the state.

Will be happy to see Sharad Pawar as PM: Nana Patekar