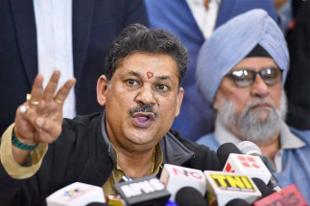 New Delhi, Dec 23 (IANS) The BJP on Wednesday suspended its MP Kirti Azad, who has alleged large-scale corruption in Delhi’s cricket body when it was headed by now Finance Minister Arun Jaitley. Azad termed the action “unfortunate” and vowed to fight on.

The action came eight years after Azad unleashed a campaign to expose what he said was massive corruption in the Delhi and District Cricket Association (DDCA), which Jaitley headed for 13 years till 2013.

The action against Azad drew immediate criticism from Delhi Chief Minister Arvind Kejriwal, who said the suspension had “totally exposed” the BJP. Azad has been punished for battling corruption, he said.

Congress leader Digvijay Singh demanded to know if Azad had been suspended for speaking out against corruption.

Party sources said a show cause notice was issued to Azad asking him to explain his “anti-party conduct”.

Azad, a member of the 1983 Indian cricket team which won the World Cup, is the first BJP MP to be suspended since Narendra Modi became the prime minister in May last year.

In Ahmedabad, Azad said it was unfortunate he had been suspended for “speaking the truth” about corruption in Delhi’s cricket body.

“What anti-party activity have I done?” Azad asked as journalists sought his reaction. “I have served my party faithfully. I never called Jaitley corrupt. I only exposed corruption.”

He said he had never targeted Jaitley “although much of the wrongdoing took place during his tenure” as DDCA head.

Azad also denied that he was acting in collusion with the Congress or the Aam Aadmi Party (AAP) which too have taken on Jaitley over the DDCA issue. “It is they who have taken up my issue.”

Son of former Bihar chief minister Bhagwat Jha Azad, the younger Azad has for years carried on a campaign against what he said was major financial irregularities in the DDCA.

Although Azad’s campaign against the alleged corruption in the DDCA began years ago, matters came to a head after Kejriwal took up the issue in a major way following a CBI raid on the Delhi Secretariat this month.

Despite denials by the CBI that it never searched Kejriwal’s office and it was after his principal secretary Rajendra Kumar for corruption, the AAP leader has said that CBI officials did enter his room in search of a file on the DDCA and Jaitley.

It was then that the BJP began to gently exert pressure on Azad to back off from his campaign as it was embarrassing the party and Jaitley too.

And disregarding a reported request from BJP president Amit Shah, Azad held a press conference to expose the alleged wrongdoings in the DDCA on Sunday.

He also stunned the BJP by speaking on the issue in the Lok Sabha on Monday.

On his part, Jaitley has filed a defamation suit against Kejriwal and other Aam Aadmi Party leaders and sought Rs.10 crore in damages. Azad then went public and asked Jaitley to sue him too.

Earlier on Wednesday, actor-turned-BJP MP Shatrughan Sinha urged the party not to take action against Azad. But with both Modi and Shah openly backing Jaitley, it was clear Azad’s days in the BJP were numbered.