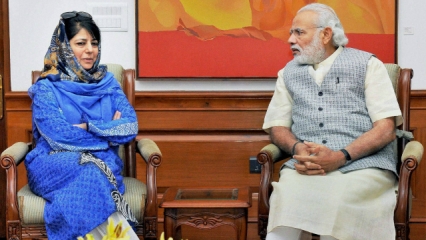 Jammu, March 25 (IANS) The BJP on Friday pledged support to the Peoples Democratic Party (PDP), paving the way for the formation of a new government in Jammu and Kashmir under Mehbooba Mufti’s leadership.

Once sworn-in, she will be the first woman chief minister of India’s only Muslim-majority state.

The Bharatiya Janata Party (BJP) also elected Nirmal Singh as its leader in the Jammu and Kashmir assembly and nominated him for the deputy chief minister’s post in the new PDP-BJP alliance government.

Mehbooba was on Thursday elected leader of the PDP’s legislature party.

The state has been without a government ever since the demise of PDP patron and chief minister Mufti Mohammad Sayeed on January 7 at the All India Institute of Medical Sciences in Delhi due to multi-organ failure.

“We have to discuss certain issues before both of us visit the governor together to stake claim,” he said.

He said it may take “two-three days” before the new Jammu and Kashmir government is formed.

Sources said the PDP and BJP leaders met at the residence of BJP leader and former state minister Bali Bhagat.

The sources said that the leaders of the alliance partners will call on Governor N.N. Vohra in two to three days jointly to discuss government formation.

The two parties were scheduled to meet the governor separately on Friday, but it could not materialise.

The state has been under Governor’s Rule since January 8.

Jitendra Singh, the minister of state in the Prime Minister’s Office, also attended the party meet in Jammu. He represents the Kathua-Udhampur Lok Sabha seat for the BJP.

Informed sources said those present in the meeting were apprised by Madhav about the recent developments, including Tuesday’s meeting in New Delhi between PDP president Mehbooba Mufti and Prime Minister Narendra Modi.

“The BJP reiterated that no fresh conditions (by PDP) had been accepted and the alliance with the PDP will continue on the basis of the agenda of alliance signed (earlier) by the two parties,” a BJP source told IANS.

Vohra had called PDP president Mehbooba Mufti and state BJP president Sharma for separate meetings with him on Friday.

A Raj Bhavan spokesman told the media that Friday meetings of the state PDP and BJP presidents with Vohra could not take place and the two will now meet him after seeking a fresh appointment.