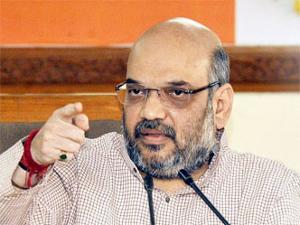 New Delhi, Jan 29 (IANS) The BJP Thursday said it will issue a vision document and not a manifesto for the Feb 7 Delhi assembly polls as it fielded a number of union ministers, chief ministers and MPs to campaign for the party.

The Bharatiya Janata Party also said it will also be asking five questions to Aam Aadmi Party chief Arvind Kejriwal every day till Feb 5 in a bid to sharpen the attack on the party that is being viewed as its main opponent in the national capital.

“The BJP will not have a manifesto for Delhi. We will have a vision document which will be released by Prime Minister Narendra Modi and (chief ministerial candidate) Kiran Bedi,” senior party leader Ananth Kumar told the media here.

He said that 120 MPs would be campaigning for the upcoming polls and 250 public meetings would be held in the next seven to eight days across the 70 assembly constituencies in the city.

In addition, the presidents of 13 state units of the BJP will also be landing in Delhi soon to campaign.

However, the highlight of the whole campaign will be Modi’s four rallies scheduled to take place Jan 31, Feb 1, Feb 3 and Feb 4 in different parts of the city.

According to informed sources, BJP president Amit Shah would review the campaigning on a daily basis, and also take into account the response garnered.

A meeting of the 18-member core group, headed by Shah, took place at the headquarters of the state unit Thursday as well where the party’s campaigning was discussed and reviewed.

Sources added that discussions were held on the rallies that will be taking place in the future, especially those to be addressed by Modi and Bedi.

The BJP also announced that it would put up five questions for Kejriwal every day till Feb 5.

On Thursday, the BJP tried to corner the AAP by asking why did Kejriwal take support from the Congress to form the government and why did he ask for facilities after denying them initially.

The other questions targeted Kejriwal for accepting SUVs, security cover, government house after becoming the chief minister as well as travelling by chartered plane and in business class as well.

The AAP, however, termed the questions “old and boring” and alleged that the BJP was “nervous and scared”.

8 women die in Chhattisgarh after botched up sterilisation surgery