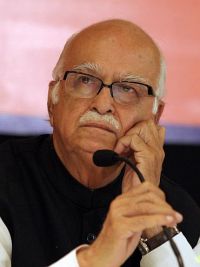 They said that Advani’s office got to know about the function through an sms that was also sent to the media.

The foundation day function had special significance this year for BJP, which came to power with an absolute majority for the first time in last year’s general elections, as it has also become the largest political party in the world with about 9.5 crore members.

A Bharatiya Janata Party functionary, who did not want to be named, told IANS that there “had been a lapse” in the way the invitation for the function was sent to Advani.

Party sources said that normally a letter or a circular is sent about a function held in the party office.

Another functionary, however, said that no circular or invite was sent for the function as it is an event held every year in the party office.

Among the party’s founding members and its three-time president, Advani did not make a speech at the party’s national executive that ended in Bengaluru on Saturday – the first time in all such meetings which he has attended.

Prime Minister Narendra Modi, who led the BJP to a sweeping victory in the Lok Sabha elections 10 months back, tweeted to greet BJP activists on the birth anniversary. “On the BJP’s ‘Sthapana Diwas’, my greetings to all the BJP ‘karyakartas’ and well-wishers,” he said.

“BJP’s phenomenal growth is due to the efforts and hard work of generations of selfless ‘karyakartas’ who devoted their lives to our nation,” he said.

The BJP would “leave no stone unturned to fulfil people’s aspirations and create an India that is strong, developed and inclusive”, Modi added.

The BJP was founded on April 6, 1980, after its earlier incarnation, Bharatiya Jana Sangh, merged into the Janata Party along with other parties in 1977.

Shah, in his address, asked party workers not to work with posts in mind.

Noting Syama Prasad Mookerjee had laid foundation of Jana Sangh with 10-12 youth, he said the party in its reincarnation as BJP was the “largest political party in the world” with about 9.5 crore members.

“Our journey is the most interesting of all political parties in the world,” he said.

Shah said the BJP was in power at the centre and in 12 states and BJP workers had “greater responsibility” and had to work for the poor, farmers and the disadvantaged sections.

“The party was formed to make India Jagat (world) guru,” he said and added that the Modi government was working to make India a front-ranking nation in terms of development.