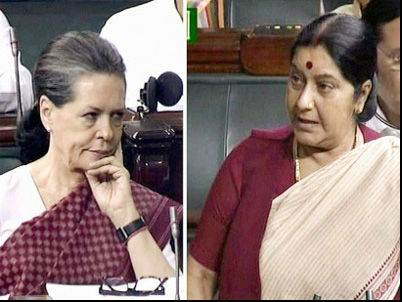 New Delhi, July 22 (IANS) The BJP and the Congress were on Wednesday locked in an all-out war over tit-for-tat corruption charges as continuing uproar over the demand for the resignations of External Affairs Minister Sushma Swaraj and the Madhya Pradesh and Rajasthan chief ministers again crippled parliament.

Both the Lok Sabha and the Rajya Sabha witnessed turmoil for the second day as the Congress and other opposition parties joined hands to target the government, which hit back aggressively — both in parliament and outside.

The government flatly ruled out the resignations of Sushma Swaraj, who has been linked to former IPL chief Lalit Modi, and Rajasthan Chief Minister Vasundhara Raje — also for her links with Lalit Modi — and her Madhya Pradesh counterpart Shivraj Singh Chouhan, who is facing the heat in the Vyapam recruitment scandal.

Rawat denied the charges but the Congress said an FIR has been registered, the aide asked to go, and a time-bound inquiry would follow.

Later, the BJP raised the issue of a chargesheet filed against former Arunachal Pradesh chief minister P.K. Thungon of the Congress over a 1998 corruption case.

There was ruckus in both houses of parliament all through Wednesday.

In the Lok Sabha, opposition members raised slogans against the Narendra Modi government.

Opposition members, including those of the Congress and the Left, trooped near the speaker’s podium wearing black bands and carrying placards. One placard in Hindi urged Prime Minister Narendra Modi to break his “silence” on Lalit Modi and the Vyapam scam.

An exasperated Mahajan first adjourned the house till noon, then again till 2 p.m. Later, as trouble continued, Deputy Speaker M. Thambidurai adjourned the Lok Sabha for the day.

The Rajya Sabha too witnessed ruckus throughout the day stalling business as the opposition pressed for the resignations of Sushma Swaraj, Raje and Chouhan.

Sushma Swaraj set the tone for the government’s aggressive pitch in the morning when she tweeted that a Congress leader had pressed her to give a diplomatic passport to a Congress leader Santosh Bagrodia, a former central minister.

Challenging the BJP that state issues cannot be discussed in parliament, Bahujan Samaj Party leader Mayawati told the Rajya Sabha that Vyapam was a national issue.

CPI-M leader Sitaram Yechury said there can’t be a debate without the ministers concerned resigning.

Rajya Sabha leader and Finance Minister Arun Jaitley accused the opposition of not wanting a debate and only being interested in making noise. He said the whole country wanted to hear Sushma Swaraj in parliament.

“Pomposity without fact is not acceptable… I dare you to start a discussion. You don’t have any facts, so you want to make noise,” he said.

Modi gives Rs.1 crore to Edhi for caring for Geeta