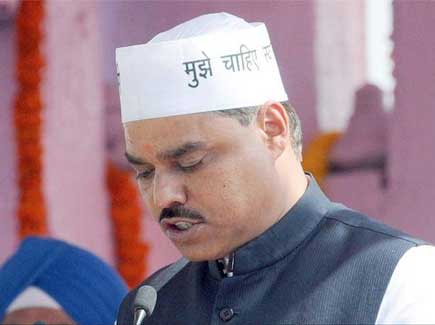 New Delhi, April 28 (IANS) The BJP and Congress on Tuesday demanded removal of Delhi Law Minister Jitender Singh Tomar following revelations in a court that a Bihar university had declared his provisional certificate as “not genuine”.

While 48-year-old Tomar’s Aam Aadmi Party (AAP) maintained that the minister was given time by the court to respond, he claimed to be having proof of his educational qualifications.

The Tilka Manjhi Bhagalpur University in Bihar, from where Tomar claimed to have obtained his law degree told the Delhi High Court on Monday that his provisional certificate is not “genuine” and the document “does not exist in the university’s record”.

The serial number of the provisional certificate in the record showed the name of some other person and not that of Tomar, it said.

The university said the provisional certificate is “not genuine” and Tomar got enrolled on fabricated document, not issued by the university.

The university’s response came on a plea against Tomar, alleging that he had enrolled himself as an advocate based on a “fake and bogus” graduation degree.

Delhi Congress chief Ajay Maken on Tuesday alleged Tomar’s law degree had been found to be “fake”. “He should be sacked immediately and vacate assembly seat for fresh election,” Maken said.

Stating that, Tomar, who also holds portfolios of tourism and art and culture had been “found with a fake certificate”, BJP MP Meenakshi Lekhi said: “The people who propagate value-based politics, their law minister has been found to have a fake certificate.”

She questioned how Kejriwal was allowing Tomar to continue in office. “He should be sacked”.

“The truth about the political outfit which he (Tomar) represents is now coming out. People of the capital must be wondering whom they have voted for,” she said.

Claiming his degree as “geuine”, Tomar said he would not resign.

“My degree is 100 percent genuine. I have all the documents to prove it so I will not resign from the post,” the minister said at a press conference.

“Soon truth will be in front of everyone. I did nothing wrong. My degrees are real. The court will decide it (truth),” the minister said.

Denying having a “fabricated” provisional certificate, Tomar said he would soon get all the records and make everything clear.

“All the allegations made against me are baseless. If I would have committed anything wrong then I would not have been constantly coming to my office.

“Very soon I will get all my records from the university and make everything clear,” Tomar told reporters in the Delhi secretariat.

The AAP termed the issue as “subjudice”.

“The minister will respond in the time given by the court,” media coordinator Deepak Bajpai said, adding that the government will take appropriate steps in accordance with the decision of the court.

An AAP leader, requesting anonymity, however, said Kejriwal has sought an explanation from Tomar on the issue.

Meanwhile, Prashant Bhushan said that if Tomar’s degree was not genuine, he should quit.

“If law minister’s degrees are fabricated, he has no business to be on that position. Delhi Government has to answer,” he said.

Tomar is the second law minister of AAP to face controversy. AAP’s former law minister Somnath Bharti landed in soup last year for his midnight raid at the house of some Nigerian women in south Delhi.