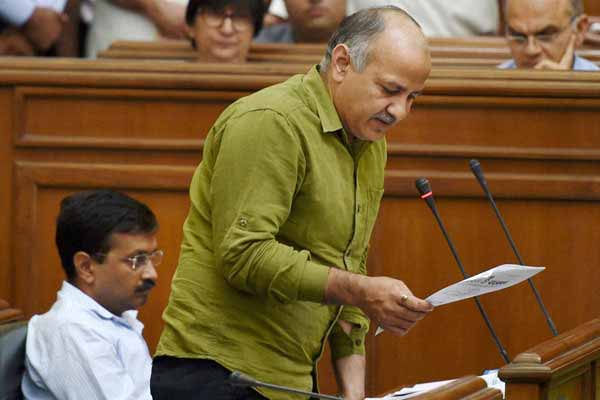 BJP legislator O.P. Sharma leapt towards Kejriwal’s bench and turned his mike, triggering panic among AAP lawmakers in the house.

Kejriwal remained unruffled, while the BJP legislator was forced out of the house by marshals. Sharma returned to the house later.

Meanwhile, the AAP tabled three bills in the house which had to be adjourned over the fake degree row in the beginning for 15 minutes.

Speaking on the arrest of former law minister Jitender Singh Tomar, Kejriwal told the Delhi assembly that Modi too must act against his ministers the way he did vis-a-vis Tomar.

“We removed Tomar from the cabinet when he was arrested,” he said, after one of the only three BJP legislators, Sharma created a din over the arrest and jailing of Tomar.

Modi, Kejriwal said, should take a cue from the Aam Aadmi Party (AAP).

Saying that Tomar had misled him over the genuineness of his allegedly fake law degree, Kejriwal said Modi too had been misled by his cabinet colleagues, and mentioned Sushma Swaraj and Rajasthan Chief Minister Vasundhara Raje by name.

“His cabinet ministers have also misled him… He should remove Sushma Swaraj from the cabinet,” the chief minister said.

He also demanded an independent investigation into charges that both the Rajasthan chief minister and the external affairs minister helped former IPL chief Lalit Modi who fled India.

On Tomar, Kejriwal said that when it began to be alleged that the AAP minister held a fake law degree, he felt the then law minister had done no wrong.

“But after he (Tomar) was arrested and sent to police custody, it seemed to me that I was kept in the dark (by him).”

Kejriwal insisted that the AAP stood for “an honest system” and “honest politics”. “We will not tolerate any wrongdoing.”

Russia launches hotline to prevent people from joining IS