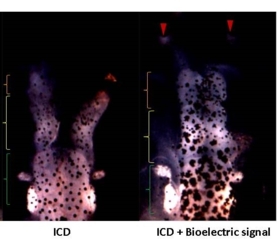 Washington, March 11 (IANS) Cells that help the brain grow and the spinal cord in frog embryos can communicate via electrical signals, finds a new research.

A team led by Michael Levin at the Tufts University in Medford, Massachusetts, found that brain development in frog embryos is shaped by changes in the voltage gradients across cell membranes.

These bioelectrical signals create a means of communication that allows the cells to coordinate their efforts with their neighbours.

By modulating those voltage gradients, the researchers were able to stimulate the growth of extra brain tissue, even compensating for brain defects caused by a genetic mutation.

The findings suggest that, in the long term, modulating the brain’s bioelectricity could be a way to address injuries or birth defects that reduce the amount of functional brain tissue.

“Basically any time you need more brain tissue, this could be useful,” Levin said.

Bioelectricity provides a way for cells to communicate over relatively long distances.

In the lab, Levin’s team modulated voltage gradients in cells by either adding or blocking channels in cell membranes that pump ions in and out.

Changing the gradient in cells outside the brain resulted in neural cell proliferation in the embryo’s neural tube as a structure that gives rise to the brain and spinal cord.

The study of bioelectricity and its influence on organ development was popular in the early 20th century but then lost favour when scientists realised that DNA is heritable and began studying genetics.

“Now bioelectricity seems to be making a comeback,” noted Min Zhao from the University of California in Davis,

The work was published in the Journal of Neuroscience.