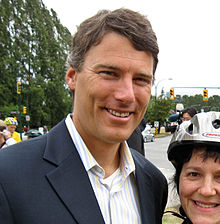 Robertson says cities are key to Canada’s future, and says a leaders debate on municipal issues is needed in the fall federal election.

Robertson was among mayors of large cities across Canada attending a meeting of the Federation of Canadian Municipalities in Edmonton.

He says infrastructure has been neglected for decades and is hampering the ability of cities to compete globally for talent and expertise.

Federal Finance Minister Joe Oliver will speak to the mayors Friday, and the mayors will also hear from Liberal Leader Justin Trudeau, NDP Leader Thomas Mulcair, and the Green Party’s Elizabeth May.